The VEC-1290K is supplied by Vectronics in the USA. It is a 100mW unit designed for compliance with the FCC Part 15 regulations in the USA. It costs $29.95 plus $14.95 for the matching cabinet kit. UK customers would need to buy the kits from Waters and Stanton PLC, at a cost of £29.95 and £15.95 respectively. Prices include VAT, and UK post and packing is an extra £3.

A regulated power supply providing 12V at 300mA is also required - this would cost around £5 so we are looking at around £54 total.

The design consists of an analogue oscillator built around one gate of a 4049 CMOS unbuffered inverter IC. This is tuned by a preset variable capacitor and jumper selectable inductors. Further gates are used to shape the waveform and buffer it to drive the Class C modulation/output transistor. The audio is amplified by an LM386 audio power amplifier IC which drives the collector load inductor of the modulation/output transistor. The RF output is tuned to the aerial through selectable inductors and trimmed by a preset capacitor. The aerial is a fixed 2 metre length of wire. The audio input is on a single phono socket with no provision for mixing a stereo feed to mono. 12V DC power input is on a standard 2.1mm power connector. 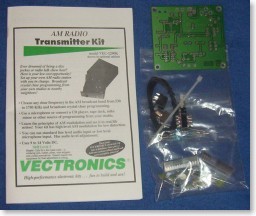 The kit is packed in a plastic bag with cardboard hanging tag, and contains the 26-page manual, PCB and two small bags of components. The matching case kit is similarly packaged.

Construction is straightforward. There are only about 40 parts, so someone with experience of assembling PCBs should have that part done in about half an hour.

The instructions are clear, and include boxes to tick when each part is fitted.

The two trimmer capacitors can fit the holes in the PCB any of three ways and there is no indication in the instructions as to which way they go. If you have used these components before it is reasonably obvious, but some constructors could be confused.

The PCB hole spacing for the ceramic disc capacitors does not match the components supplied so it is necessary to form the leads to suit or leave them somewhat proud of the PCB. There is no mention in the instructions of the precautions that should be taken when handling static sensitive ICs.

I tuned a radio to a clear area at the low frequency end of the MW band, set the jumpers in the VEC-1290K to suit, connected the power and adjusted the trimmer until the correct frequency was being transmitted. With an audio signal connected, initial results were not good. The audio was distorted even at low levels, and any attempt to peak the aerial trimmer resulted in whistles and instability. The LM386 amplifier IC became too hot to touch within a couple of minutes.

I suspected that the circuit was suffering from instability, and a few checks with the 'scope quickly confirmed that. The 12V supply rail was superimposed with both RF and audio signals.

Since the designers only included a single 0.1uF decoupling capacitor for the whole circuit, and there is a 2-metre length of flex from the power adaptor, I was not at all surprised that it misbehaved! A 10uF 25V electrolytic across the power rails cleaned it up nicely, and bought about considerable improvement in audio quality - as long as aerial trimmer wasn't peaked. I fitted the 10uF capacitor in place of the original 0.1uF decoupling capacitor (C7) with positive towards the centre of the PCB, and soldered the original 0.1uF capacitor in the same place on the underside of the PCB. 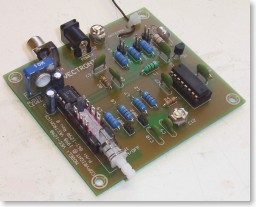 The instability as the aerial trimmer was adjusted was found to be due to the RF getting into the audio input circuit. Fitting a 0.01uF disc ceramic directly across the input of the LM386 (between pins 2 and 3) on the underside of the PCB cleared this up nicely. It may be possible to fit a smaller capacitor between pins 2 and 6 of the LM386 instead to provide negative feedback at higher frequencies, but I haven't investigated this idea yet.

Suspecting a faulty 4049 IC, I ordered a couple of replacements from RS. I also ordered a couple of LM386 ICs at the same time. A replacement 4049 fixed the oscillator problem, and it now works over the full range of frequencies, and has continued to work over several days. I tried a replacement LM386 to see if this would help the instability problem, but it didn't make any difference.

I also tried a different power supply (a proper bench supply) and a different audio source, neither of which made any difference either.

So to get the unit to work properly we need to add a 10uF electrolytic and a 0.01uF disc ceramic! Were the designers trying to save a few cents by trimming the design down to the minimum they could get away with, or was it just not tested properly?

The case consists of two pieces of U-shaped sheet steel, punched with holes for the necessary controls and connections. The top/side section has a textured black finish. 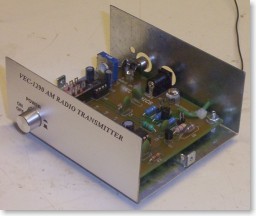 Self-adhesive paper labels are supplied for the front and rear - these are a passable brushed aluminium effect with black text. They are simply cut out (I used a steel rule and a utility knife) then stuck carefully in place, once the case panels have been degreased with lighter fluid or similar. The holes for the controls and connections can then be cut out with a sharp utility knife. Unfortunately my front panel label was creased in the packing and despite attempts to flatten it, this still show.

The kit includes all the necessary fixings and a knob for the power switch. My kit also contained a U-shaped spring clip that served no purpose and wasn't mentioned in the instructions.

I did not like the aerial wire emerging from the hole in the case unprotected, so I fitted a short length of sleeving over it, secured by the cable tie that anchors the aerial wire to the PCB.

The case looks reasonable, but I think the claims that it "turns your kit into a fabulous show piece!" are somewhat exaggerated. It's still better and easier than a DIY-job in a plastic box from a component supplier however.

For use around the house I normally set a low MW frequency, generally 531kHz, as this end of the band is generally free of interference and broadcast stations. On this frequency, with the unit upstairs, the aerial positioned vertically and the aerial trimmer peaked, I was able to receive the signal around the whole house (a standard sized 3-bedroom semi with plasterboard walls), and more weakly out into the garden. Once I got out into the street the signal became lost in background noise. 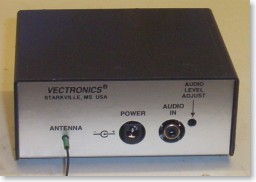 This test was done with a 1970s 5-transistor pocket trannie radio - a more sensitive modern set may do better. So the range of the unit is certainly adequate for our purposes and is unlikely to cause interference to neighbours etc. At higher frequencies the range would be increased - figures of a quarter of a mile or more are claimed for these 100mW transmitters. Clearly we do not want to attract that sort attention to what we are doing (bearing in mind that these transmitters are illegal in the UK), so we would probably detune the aerial trimmer to achieve the desired range and no more.

The analogue frequency adjustment makes it a bit tricky to set the frequency exactly to the 9kHz steps that transmitters in the UK and Europe are supposed to use. If you are listening on valve or transistor radios with analogue tuners this doesn't really matter however. There was no noticeable frequency drift over the period of testing.

If you have a multimeter with a frequency range, connecting the negative probe to the circuit ground and placing the positive probe close to the aerial should give enough signal for the meter to indicate. With some care and patience (and an insulated trimmer tool) the frequency can be set to the exact figure required.

If you have a 'scope, the easiest way to peak the aerial trimmer is to clip the probe onto the insulated aerial wire, then adjust for maximum signal. Don't connect the probe directly to the aerial terminal as this will detune the circuit slightly. The kit manual shows a simple arrangement using a multimeter and a germanium diode for those without a 'scope. Otherwise you may have to tune for maximum range (or desired range) by trial-and-error.

If you are using a stereo programme course you will need to combine the two channels with a couple of 1k resistors to feed the mono input. If you are making up a lead for this you should be able to fit 1/8W resistors inside the plugs.

I am disappointed that the kit does not work correctly as supplied. It seems that the only way to get the unit to work properly is to add two additional capacitors as described above. Not a big problem, but it does suggest that the design has not been properly thought out and tested. I wonder how many users have been disappointed with their units as a result. 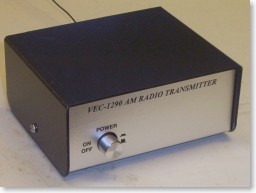 I am also a bit concerned about the failure of the 4049 IC in my unit. Hopefully it was just an isolated incident...

Once the modifications are done, the unit performs very well. The audio is clear, the level can be adjusted to achieve 100% modulation, and the range is certainly adequate for our purposes.

If the pricing in the UK was a direct conversion from the Dollar prices the main kit would cost us £13.90 and the cabinet kit would cost us £8.33 (prices based on an exchange rate of $1.00 = £0.557, as of 9th October 2004). At these prices it would be excellent value for money - even if we had to add the VAT. Unfortunately the UK distributors are charging around double this amount, which makes the unit much less attractive compared to the competition. "Rip-off Britain" yet again...

If the choice was this VEC-1290K unit, the AM03 or the Gizmo, I would say this is the best of the bunch. However once the AMT3000 enters the equation, things don't look so good for the VEC-1290K.

I asked the manufacturers for their comments on the points I raised in this review, and received the following response:

We have not experienced any problems of this sort over here, and it is our most popular kit. The original designer of this one is long gone. This kit was written several years ago when we began selling to Radio Shack/Tech America.

The UK pricing is from Waters and Stanton. You'll have to ask them why the pricing is so much higher in the UK. I do believe they cover all customs and shipping in the price as well as warranty (service) if something is wrong.

I also emailed Waters and Stanton regarding the pricing, but received no response despite two reminders.

There are a number of interesting comments about this unit on the VEC-1290K page at the Medium Wave Alliance archive site, which suggest that these problems are not as isolated as the suppliers suggest.

UK customers would need to buy the kits from Waters and Stanton PLC. The cost is £29.95 and £15.95 respectively (including VAT, excluding P&P which is an extra £3). Because the website uses frames I cannot link directly to the product pages, so use the search facility and enter the kit number.