This is a small four-valve MW/LW set, probably made in the early 1960s.  There are also Philips and Cossor versions (B2G25U and CR1202U respectively) of this model which are electrically identical but have different cabinet colours.

The set is electrically similar to the Philips B2G81U and Cossor CR1201U, with the exception of the loudspeaker arrangements, which are detailed below.

I cannot remember where I bought this set, but I think it was probably the BVWS swapmeet at Wootton Bassett towards the end of 1999 (I bought a number of sets there, all from one stallholder).  It is unlikely that I paid more than five pounds for it.

As found, the set was complete, apart from the trim on the front of the case (as shown in photo here).  The cabinet, which is made from a fairly soft plastic, is in reasonable condition for a set of this age and style.  There are some minor surface marks and a very small crack on one side at the back.

Internally it looked untouched.  There were no signs of discolouration due to heat, which suggests that the set had not received a great amount of use.

From a quick glance at the circuit diagram or the set itself, you would be forgiven for being somewhat confused!  Unlike virtually every other set, this radio has no output transformer.  Instead the loudspeaker is connected directly in the anode circuit of the output valve.

Normally this wouldn't work, but in this instance the impedance of the speaker is 700 ohms.  Philips (remember Stella is Philips rebadged) were quite keen on using high impedance speakers in their high quality sets, because the elimination of the output transformer bought about a significant improvement in sound quality.  Often a two-valve push-pull circuit was used, with the speaker capacitor-coupled.  Alternatively a small, low-ratio (probably 1:1), transformer would be used with a single valve – the sole purpose of the transformer being to remove the DC bias.

I suspect in this case however, the reason for the high impedance speaker and lack of transformer was cost saving.  The speaker is connected directly as the anode load of a single valve.  It therefore has to carry around 40mA of DC bias current, in addition to the AC signal it is required to reproduce.

The voice coil must have been quite a challenge to manufacture.  Normal low impedance voice coils are fairly delicate, so try to imagine the vast amounts of extremely thin wire required to achieve a resistance of 700 ohms!  Then consider that this is expected to carry 40mA continuously.

I was fully expecting the loudspeaker to be open-circuit, so this was the first thing I tested.  The meter showed a resistance of 750 ohms – which was a relief!

These sets do not use any of the types of capacitors known to cause problems.  Since there were no obvious signs of distress, I decided to give the set a quick test.  I connected it to the mains via the Lamp Limiter, so that in the event of a fault the current would be limited to a reasonable level.

It worked – well it sort of worked.  The sound was distorted at low volumes, but improved markedly as it was turned up.  The distortion is difficult to describe, but the cause was evident – the speaker voice coil was sticking.  At low volumes this resulted in distortion as its movement was restricted, but at higher levels there was enough force to largely overcome the sticking.

However to make sure everything else was OK, I connected an output transformer and test speaker in place of the set’s speaker.  This worked fine.  I left the set running this way for a while and carried out a few voltage checks. Everything was fine. The only electrical work needed was the replacement of the mains flex with a modern type.

This set is better designed than the Philips B2G81U when it comes to disassembly for normal servicing operations.  The volume and waveband knobs are simply pulled off (the control shafts are recessed into the cabinet and have plastic couplers fitted), then five screws are removed and the chassis is lifted out.  The tuning dial remains on the cabinet and is coupled to the tuning capacitor via a simple locating lug arrangement.  The speaker wires can then be unsoldered if required.

Removing the speaker from the cabinet is a bit more difficult, because it is retained with those horrible push-on spring clips.  These are fine on Bakelite, which is very hard.  But on softer plastic they tend to dig in more, making removal difficult.  Plus there is the risk of breaking off the plastic spike they are pressed onto.  I found the most effective method of removal was to grip the clip on the sides using long-nosed pliers and rotate it back and forth while pulling.

The same arrangement is used to hold the white front into the brown cabinet.  Since I intended to give everything a good clean, and the front trim had to be replaced, these clips had to be removed too.  I managed to break one of the spikes, but the other five were OK.

The tuning knob is held in place with yet another of these clips, bearing on a piece of felt to give smooth rotation.

Once the speaker was out of the cabinet, the cause of the problem was apparent.  The edge of the cone had become detached from the frame.  I reconnected the speaker to the chassis and switched the set on.  Note that the voice coil is at HT potential with this arrangement – I ran the set through an isolating transformer for safety, but still took great care not to touch the connections.

By holding the cone edge in position I confirmed that refixing the cone was the only repair required.  However I did notice that the effect of the DC bias current through the voice coil was to pull the cone inwards, almost as far as it could move.  This caused some distortion at high volumes because the movement was restricted.  I then tried reversing the speaker connections (switching off first, of course).  This caused the cone to be displaced outwards, where it has more room to move.  The results were better, with no distortion at high volume.

After switching off again, I glued the cone edge back into position with EvoStick adhesive.  I also marked one speaker wire and the relevant speaker tag with black marker pen, so that I could connect it correctly when reassembling the set later. The speaker cone seems to be further in than normal when the speaker is at rest, so it may have been deliberately designed such the DC bias would move it out to the correct position.  However there is no mention of this in the service sheet, and the two speaker wires are the same colour, giving a 50-50 chance of connecting it incorrectly.

To replace the missing trim, I was able to obtain some brass shim, about 0.1mm thick, from work.  This material can be readily purchased from engineering supply firms.  This thickness is about as rigid as thin card, and can be conveniently cut with scissors.  I cut a piece of shim a bit larger than required, and placed it temporarily in position on the front, with the straight manufacturer’s cut edge inwards.  From behind I carefully scribed the curve required to clear the tuning control.  I cut this slightly oversize with nail scissors.

After removing the original glue from the cabinet with a blunt chisel, I cleaned and degreased this and the shim with isopropyl alcohol.  I applied a thin coat of EvoStick to the cabinet and pressed the shim into place.  The material is light enough that no additional support was required while it dried.

After a couple of hours I carefully trimmed the edges of the shim.  By using the edge of the front panel as a guide for the scissors (I used a pair of good quality paper scissors), I was able to carefully cut it to exactly the correct size.  The tuning dial curved section and a couple of minor irregularities on the outside edges were then carefully finished using needle files.

Originally a "STELLA" nameplate would have been fitted onto the trim, above the speaker.  This is just visible on the service sheet.  However I decided that anything I could make would not look original, so I decided to leave the set unbranded until I can find a suitable badge from a scrap set.

Jon Evans has now kindly sent me some good clear close-up photos of the logo on his set (shown here), together with dimensions. It appears that the name was printed directly onto the trim, rather than being a separate label. Sometime I will attempt to reproduce it in CorelDraw, print it onto clear film and fix it to the set. 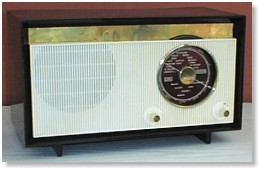 The cabinet front was carefully washed in running water using a toothbrush, to remove the dirt from the speaker grill.  The cabinet itself was cleaned with foam cleanser, then polished with “Mr Sheen” household aerosol polish.  This works well on the soft plastics used on these later sets.

The brass trim on the knobs and on the front panel around the tuning scale was polished using Brasso and paper tissues.  The clear tuning knob was then polished with Greygate Plastic Polish to remove some slight surface clouding.

As they say in the car maintenance manuals “reassembly is a reversal of the above procedure”!  Everything went back together as expected, with no dramas.

While I had the chassis out I was wondering to incorporate the modification described in the Philips B2G81U repair, for improving the sound quality.  However I decided it would be unfair to do this without trying the set as originally designed first.

I am pleased I made that decision, because the set sounded good as designed - much better than an unmodified B2G81U.  Since the only difference is the speaker and lack of output transformer, this does suggest that Philips were on the right track with their attempts to eliminate the output transformer to improve quality.  This also suggests that the transformers used in sets like the B2G81U were not very good quality, which is probably why these need my modification.

Probably my only grumble about the set is that there is a small amount of play in the coupling of the tuning knob, which can make tuning a bit awkward.  The tuning drifts a bit as the set warms up, but this is not uncommon with the cheaper valve sets.