I bought this set at the National Vintage Communications Fair in November 1998, and it had been waiting for some attention since then. However a customer agreed to buy it (he wanted it as a bedside set) so I had to get it repaired and restored to his requirements fairly quickly. The set is a small AC/DC model in a Bakelite case, with MW, LW and VHF wavebands.

From an initial quick look around it all looked fairly tidy and did not show many signs of previous repair work. Before I even considered switching it on I replaced several wax-paper capacitors which had seen better days, and fitted a new mains flex (the original had been cropped close to the case). The original dial lamp holder was broken and a second holder had been crudely connected in series with it - the pair were lose on the chassis and both bulbs were blown! I fitted a new holder which would mount properly on the bracket, and a 24V 2.8W lamp as called for on the set's back panel. The ferrite rod aerial was broken, but it was a clean break near the middle so I repaired it with Superglue. The main smoothing cap checked out OK with my reformer. All the valves were the correct types, and were probably the originals. I did not bother to test them.

Time for a test. I connected the meter across the HT and switched on. Nothing. Not even a glow from the dial lamp or the valve heaters. The on/off switch was OK so the heater chain must be open-circuit (this is an AC/DC set with a series heater chain). A few checks with the meter narrowed it down to the UCH81 frequency-changer, but a test across the pins of the valve itself proved it to be OK. Therefore, it must be the socket. I attempted to tighten the socket contacts with a small screwdriver but they just broke away. No choice but to fit a new valve holder.

Why is it that the most inaccessible valve holder in the set is the one that needs changing? In this case it was close to the edge of the chassis, next to the wavechange switch, and covered with components. Anyway moaning about it does not help, so I had to get on with it! The first stage was to sketch all the connections, then the wires and component leads were carefully cut or desoldered (if there is sufficient length in the leads I prefer to cut them as it reduces the risk of causing damage with the soldering iron). The holder itself was fitted to the chassis with rivets, but these were quickly removed with a 3mm drill.

The new holder was fitted with a couple of 3mm screws and nuts. I fitted solder tags under the screw heads on the top of the chassis to attach the valve-retaining clip to. The original base had fixings for the clip but the new one did not. Normally I would not bother about this, but this set had to be posted to my customer and I did not want to take any chances. Resoldering all the connections was a fiddly process, and resulted in the accidental destruction of one capacitor - such is life!

Once it was all back together, it was time for the second test. A quick check with a meter across the mains plug confirmed that the heater chain was alive now, so time to switch on. The dial lamp came on straight away, followed by the valve heaters. As the HT rose there were some crackling sounds from somewhere and the dial lamp flashed brightly. Since the dial lamp is connected in the mains neutral line these symptoms meant only one thing - the rectifier valve was flashing over. Fortunately UY85s are fairly common and I have several good used spares, one of which quickly solved this problem.

Test three! This time the HT rose nicely to within ten volts of the figure on the Trader service sheet (close enough), and the sound of static came from the speaker. A quick check on all three bands proved it was working OK on MW and LW, but VHF was not so good. The tuning seemed much more critical than usual, and the sound was a bit distorted on some stations. None of the IF adjustments showed any signs of being disturbed in the past, and a quick check with the signal generator produced a nice peak at 10.7MHz. However, it was found that with the meter connected across the ratio discriminator (VHF detector) capacitor, the best reception did not coincide with the tuning peak. My initial thought was the UABC80 valve, but trying a replacement soon disproved that theory. I tried a replacement UBF89 IF amplifier valve too, which did not help.

A closer look at the circuit diagram showed that the circuit was not as conventional as I had first assumed. Most sets of this type use two diodes in the UABC80 for the VHF detector, leaving just one for the MW/LW detection and AGC. The performance on MW/LW with this arrangement is not as good as it would be with separate diodes for detection and AGC, but since most people didn't use this sort of set for receiving distant stations it really wasn't a problem. However, Pye thought differently. The usual UF89 IF amplifier valve was replaced with a UBF89 type. This RF pentode also contains two diodes, one of which is used for the MW/LW AGC circuit. The UBF89 is, in my opinion, a somewhat inferior double-diode/RF-pentode. It normally turns up in cheap MW/LW sets, partnered with a UCH81 frequency changer and a UCL82 (or similar) triode/output-pentode. The main problem Pye's designers encountered when incorporating it into a VHF set was that the VHF AGC cannot be arranged by simply connecting the ratio discriminator capacitor voltage directly to the IF pentode's suppresser grid, as is done with the usual UF89 IF valve. Instead there is a convoluted arrangement of resistors (including two 10M resistors to the HT rail) to control the VHF AGC on the same rail as the MW/LW AGC. Well it nearly works... 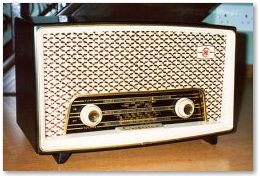 So, what has all this got to do with the problem? Well by varying the values of some of these resistor I proved that the whole arrangement could be best described as a compromise. By reducing the effect of the AGC, I could improve the tuning so that it peaked properly - but then it overloaded on strong signals. I spent half an hour trying to arrange something that would work properly, with no success. In the end, the best I could do was to connect an 18K resistor across the primary of the final IF to dampen and widen the peak. This made the tuning less critical (although best reception still was not at the tuning peak) and solved the distortion on some stations (due to the level of modulation used on today's broadcasts being wider than the IF bandwidth). Still a compromise, but the set now gives good reception on reasonably strong signals, which is what it will be called upon to do by its new owner.

In case you are wondering, the additional diode in the MW/LW detector/AGC circuit did not improve the performance on these bands significantly. What they gained with the diode was probably lost with the choice of IF amplifier valve and the overcomplicated AGC circuit. So, why did they do it? Who knows!

Well that is the electronic repairs. I will not bore you with the details of the case restoration, suffice to say it was thoroughly cleaned, the cream sections were resprayed and it was fitted with new speaker fabric. The photo at the top of the page shows the set in its original state, the other photo shows the finished set.

To follow-up on this repair, I have recently repaired a Pye R37 "Rancher", which uses the same basic chassis and circuit as the R31, and this set does seem to have the same shortcomings in its VHF performance. This would confirm that this is a design problem rather than a specific fault with the set I repaired.

This is actually perfectly straightforward and uses circuitry directly descended from that employed in the Wartime Utility Receiver. The AM AVC bias is taken from the top of the detector diode load resistor R12, 470K. If it were used directly, it would provide only simple AVC so a clamp diode is employed to prevent its coming into operation until a certain signal level is exceeded. This diode is part of V3, UBF89. The positive clamp voltage is obtained from the HT+ line via R14, 22M. On FM, the AVC bias is taken from the top of the discriminator load resistor R21, 47K, via R19, 4.7M. If you take a long look at this circuitry, you will find that it is both simple and effective. If it fails to work properly the usual suspect component is the clamp bias feed resistor, so I would humbly suggest that you put everything else back as it was and check the 22M (or 2 x 10M in series) for excessively high resistance. Also, check the 4.7M.

Pye did know what they were doing, honestly!

I have recently obtained another Pye R31. I will take another close look when I get around to repairing this set...