This "Recent Repair" was kindly contributed by Steve Pendlebury.

This article continues from my restoration of the P116U by looking at the P117, 3 Waveband Pye Piper. This is the same size and similar in styling to the P116U, but the insides of this set are noticeably different.

Dilys had also taken pity on this set, which had been re-stained a rather lighter colour than would have been expected. The cream leather trim on the front had been matt-emulsioned pure white and to this day I am unsure as to whether the red and gold knobs are the correct ones or a matching pair that someone had fitted because they looked 'about right'. 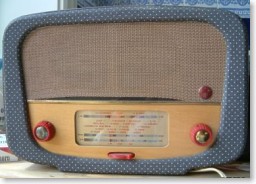 The AM only piper is AC/DC and uses the 'U' heater rating - UL, UY, etc. and is constructed on a PCB. The FM version seems to be made of somewhat sterner stuff, being chassis constructed, AC only and using EZ, ECL, etc (6.3v heaters).

Initial inspection after the cabinet had received some remedial action involving thinners and a brush to get the emulsion off its leather, showed that the set appeared to be in reasonable shape.

There appeared to be no signs of distress, apart from a loose smoothing capacitor (soon resecured) so once everyone was clear, I applied mains and waited to see what the set offered up.

Interestingly, the ECC85 is used as a mixer/oscillator on AM. This valve contains two triodes, V1a and V1b. V1a serves as a mixer, the local oscillator duties undertaken by V1b. Local IF injection is fed to the cathode of this mixer stage via R2 and C4, L3 and C3. The IF generated at the anode of V1a is 470kHz.

When the set is switched to FM, V1a becomes a triode preamplifier, the other triode V1b becoming a self oscillating mixer, generating an IF output of 10.7 Mhz.

After looking at the circuit, I was somewhat relieved to see that there was life on all bands, albeit somewhat weak. This set is supposed to come with a throw out antenna for FM, but its performance, given my location in relation to Winter Hill and to Holme Moss was at best disappointing. The AM bands fared a little better but were still a little disappointing. When the external antenna was connected, we had good performance on all bands, however it really should have been better than this without outside help.

I shone my little pocket torch at the front end of the set, and could see exactly where little phantom fingers had been tempted! There's a nice little trimmer here, a small multiurn variable capacitor. The trader sheet does not make it 100% clear where this is in the circuit, I suspect somewhere on the RF / Antenna tuning side, something like C7 or C8 (?) but from the position of this trimmer, the insulation on its spindle and its setting (fully screwed in), it was obvious that someone had been tempted.

Tweaking is only for those of us who:

So I gave it a tweak which livened up the AM quite considerably on both ends of the MW band and on LW, but the set still underperformed, especially on FM.

It's also worth adding that tweaking to mask a fault is not restoration. One day, The Phantom will realise this.

The set was better but not right, but as it was weak all round, I decided to try another ECC85. Now in many cases, if an ECC85 isn't to hand, you can get away with an ECC88, or the high grade equivalent, an E88CC (this is the one with the gold pins). This set, however, does not afford us such a luxury, as with an ECC88 fitted, we had much improved reception on MW and LW, but the FM band was full of hisses, noises, garbles and nothing of any entertainment value. This does not mean that I was able to pick up all the local commercial pop stations, but the fact that it rendered the FM band completely inoperative.

So I had to give in to the set's whims and fit another ECC85. Perhaps the fact that the front end on this set is not conventional prevents it from accepting an ECC88. I do have rather more of these latter valves and in most cases they do perform well in this position. Ah well….!

With a new ECC85 fitted, we had much improved performance on AM and Mediocre performance on FM. This set did originally come with a throw out antenna for FM, and the manual says that "satisfactory performance" would be obtained with this. I contrived such an antenna and the set livened up, so we were obviously on the homeward stretch.

As the set had been tweaked, both by the phantom and then by your humble narrator, I went over the set and aligned it as per the manual. The IFs were pretty much right, so it was just a matter of RF trimming, padding and callibration.

One or two capacitors were found to be a bit leaky and were replaced. The set was then reassembled and lef to to run for a while, just in case any other problems showed their ugly heads. None did, so I can say that I now have two sets that aspire to mediocrity…..!

The photo above was found on eBay a while ago and is therefore Copyright © eBay and/or whoever took it.

It suggests that the red knobs Steve commented on are probably correct.