This "Recent Repair" was kindly contributed by Richard Newman. 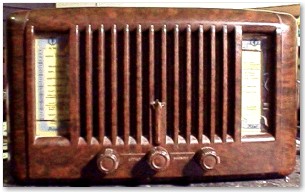 A few weeks ago I was given this little Pilot set, which had belonged to an elderly person. It was found in the loft when they cleared her house out, wrapped in newspaper dated 1970. This would imply that the set had not worked since then and possibly before.

It appeared to be in completely original condition. When I removed the chassis a small amount of rust was evident but no signs of previous repairs were obvious. A few meter checks soon revealed that most of the wax paper caps were leaky and the main smoothing cap had dried up. It had a resistance reading of only a few K.

The dropper was fine. I was so keen to get it going that I spent the next few evenings cleaning it up and replacing all the leaky caps.

When I tried the set however it was completely dead. This turned out to be nothing more than an open-circuit heater in the 12Q7GT AF amp/detector valve. No chance of getting one of those on a Saturday evening! What I did temporarily was to use an ECC83 wired for 12V heater, and a couple of OA81 diodes. I removed the base from the old valve and wired everything into that, so that it replaced the original valve. It worked! The set came on and worked extremely well with the exception of the pilot light.

It needed some RF alignment, not too much, but this further improved the sensitivity. One of the IF cores is completely jammed but I think it is best left alone. The other IF cores hardly needed attention. I had to replace the 30 feet or so of 'throw-out' long-wire aerial because the original had rotted.

The following Monday I obtained a replacement 12Q7GT and fitted it in place of the temporary substitute. The performance of the set was just the same. What I find striking about it is the quality of sound from a fairly small speaker.

The other valves appear fine. They all look original and the rectifier is producing 280v at the cathode. Considering they are nearly 50 years old, I think that is pretty good.

The output stage built around the 35L6GT seems to have some negative feedback arrangement. There is a centre-tapped cathode bias arrangement using a 270-Ohm and a 22-Ohm resistor, with a 50uF capacitor across both. The set hums quite badly without this capacitor. Whatever the manufacturers did around here certainly seems to provide a good sound.

The pilot lamp was easy to replace. There are actually two lamps in the set but only one operates at a time depending on whether you are on MW or LW. They do not light the scales; they just illuminate the 'Little Maestro' motif at the top of either scale.

So that's another to add to my collection. I've run it every day for about 2 hours since repairing it and had no problems at all. I'm sure that the original problem was just the open-circuit heater and the other faults were probably caused by it being left unused for so long.

After a few weeks, it developed an intermittent crackle. This was caused by dirty contacts on the output valve pins (something I should have checked earlier). So I cleaned the pins on all the valves. Everything is now fine.

All that remains is to tidy the set up.

The above text and photograph are Copyright © 2000 Richard Newman

After reading Richard's description of the output stage, I took a look at the circuit diagram for this set. The output stage is shown above.

It appears that the two resistors in the cathode are being used as a potential divider to derive biasing for earlier stages. This would explain why the set hummed with the capacitor removed - it is needed to decouple this bias supply.