There are some sets which, from a quick check over the chassis, don't appear to have much wrong - but when you get down to repairing them you find that you have quite a mess on your hands. This interesting Philips is a good example of that!

The Reverbeo was clearly an expensive set, aimed at those who were seeking high quality sound. It has it's fair share of bells-and-whistles too, with "Stereo" sound, separate bass and treble controls as well as "Speech" and "Hi-fi" selection switches, a balance control, four wavebands. But the most unusual feature has to be the reverb (echo) effect system, which gives it its name! Quite why this effect was included is hard to see, but it must have been seen as a good selling point at the time. The stereo sound is a bit of a con too - in fact stereo is only available when the unit is used with a separate record turntable. The set was made before the days of stereo broadcasts on VHF so for radio the set is actually mono (the front says "Stereo Gram - Bi-Amp Radio" which is honest enough). Whether the reverb effect was supposed to give a stereo effect on radio I haven't yet established.

Anyway the set arrived with the complaint that it wasn't working. Fortunately the cabinet had an access panel on the underside which saved removing the chassis, and from there I couldn't see much that looked amiss. There were a couple of discoloured carbon resistors at one end and an overheated wirewound resistor at the other end, but these all checked out OK with the meter (I couldn't read the markings but the resistors weren't open-circuit which was good enough for now).

So I decided to plug it in and see what happened. In fact absolutely nothing happened! Tracing through showed that the thermal switch in the transformer was open-circuit, but to get to this I had to remove the spring-line delay unit that was mounted in the back of the cabinet. This also revealed four fuses, all of which were OK. Although I have suitable replacement thermal switches I decided to just fit a link for now because the customer wanted a quote first and I was trying to arrive at this with the minimum effort and expense. When I switched it on this time the dial lamp lit and a few seconds later something on the chassis produced a loud buzzing vibration sound and a hot smell. The meter I had connected across the HT hadn't indicated anything. I switched it off quickly!

A few resistance checks showed that the HT rail had almost a dead short to chassis. But what about the fuses, shouldn't one of them have blown? Well they probably did previously, which is why someone had fitted larger ones! At least removing the fuses provided a convenient way of isolating the problem, which turned out to be one of the output transformers having a short from primary to secondary. From the look of the transformer it had been running hot for some time before it eventually gave up. This suggests that there is another fault waiting to be found, but I had enough information now to make a reasonable guess at the repair cost.

The output transformer is a tiny unit mounted on the end of the chassis and there isn't room for anything bigger, so it will have to be rewound at a cost of maybe £30. The EZ81 rectifier would almost certainly need replacing, plus one or maybe both the EL84 output valves, so that adds £20 or so for valves. A circuit diagram would be almost essential so that's another £5, then maybe £10 for other sundry components (resistors, fuses etc.) so we are at £55 before I even think about my time. I gave my customer an estimate of between £70 and £100, and I'm waiting for his decision. To be continued...?

Just as I was finishing this web site update I heard that my customer does wish to go ahead with the repair. Full details will be added here next time, but I have just removed both output transformers to send for rewinding. Although only one is faulty, the person doing the work feels it would be helpful to have the good one too so that he can take some measurements. In the process of removing the transformers and noting down the connections I found that the impedance of the speakers is 800R! Yes, really, eight hundred ohms! I'm sure Philips considered this a good idea at the time but today it just seems strange and pointless. Fortunately both speakers are OK, otherwise I really would have a problem!

It's now a couple of months later!

The rewound transformer is now back from the rewinder's, together with its good brother. The original transformers are mounted in a moulding made from a hard cream-coloured epoxy, and to dismantle the faulty one the rewinder had to break this epoxy apart with a hammer. So, although I now have a pair of functional transformers, the rewound one does not have this mounting. Because the transformers are hidden on one end of the chassis I decided against trying to mould a new mounting using Araldite, and instead made a small metal plate to support the transformer and allow it to be screwed to the original holes on the chassis. The transformer was initially fixed to the plate using self-adhesive pads, and the join was then reinforced using Araldite. The transformers were then refitted, and wired in accordance with the notes I had made when I removed them.

I tested the rectifier and output valves, and as expected the rectifier was in a rather sorry state. However the output valves were fine. Also the grid coupling capacitors were OK, as was everything else I checked - so I could find no real reason for the output transformer to fail. I noticed that the tone corrector capacitors, connected between the output valve anodes and chassis, were those horrible black things that Philips like to use. Since they are known for their unreliability and a leaky capacitor in that position would draw excessive current through the output transformer, I replaced them both as a matter of course.

I also bridged the faulty thermal trip on the mains transformer with a replacement type, mounted against the windings and suitably insulated. The correct value fuses were fitted, the cremated resistors were replaced (thanks to two kind visitors who sent me copies of the circuit diagram), and everything was ready for a test.

I connected a meter across the HT and switched on. No smoke, no horrible noise, and the HT rose as expected. I connected an aerial, turned up the volume, fiddled with the tuning - and it worked.....

.... Well one speaker worked, the other amplifier channel was dead. Time to check the output transformer wiring again. It did agree with my notes - but it didn't quite agree with the circuit diagram. Presumably whoever had attempted to repair the set previously had reconnected it incorrectly when they disconnected it for testing. The transformers have three separate windings - the usual primary and secondary, as well as a separate third winding for the HT smoothing and hum cancelling arrangement. The HT smoothing windings should be connected in parallel, together with series resistors, between two sections of the smoothing capacitor, then the smoothed HT should pass through separate fuses for each channel before arriving back at the transformer primaries. To add to the confusion these fuses aren't shown on the circuit diagram. I can't quite remember what the wiring error was, but the HT wasn't getting to the primary of one transformer. 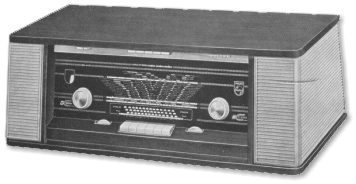 With this problem sorted it was time for test two. Much better - both channels are alive now. A quick check through the wavebands shows that all are working well. But the Reverb thing doesn't seem to be working at all. When it is selected one channel goes silent. So clearly it affects one channel only. Interestingly the reverb system uses the one and only transistor in the set - to amplify the output from the spring-line delay unit. Because transistors and valves use such wildly different supply voltages Philips engineers had the inevitable problem of trying to find a few volts DC without going to the expense of a separate transformer winding. They found the volts on the cathodes of the output valves. These use a shared cathode resistor and bypass capacitor so this voltage simply needed decoupling before using it to power the transistor amplifier. And this is where one problem lie - the 820R decoupling resistor was open-circuit. It wasn't burnt out, in fact it looked fine, but it was open-circuit. A replacement soon got the supply onto the transistor circuit, but still no joy. The signal was reaching the input to the spring-line, but nothing seemed to be coming out. Was one of the transducers in the spring-line open-circuit? Not quite - checks with the 'scope showed that the signal was present on the output of the spring-line, but not at the base of the transistor. One of the wires between the spring-line and the chassis was broken. This is the fine flexible wire with nylon in the middle - like the stuff used to connect to loudspeaker cones - so the break was not easily visible.

With that problem fixed the set was finally working! It took me a while to realise that the Bass and Treble controls only operated when neither the Speech nor Hi-fi buttons were pressed. Speech is equivalent to both controls at minimum, and Hi-fi is equivalent to both at maximum. In Hi-fi mode the set sounded really good, particularly when listening on VHF. Clearly this is an expensive set, and great effort had been taken to ensure good sound quality.

As for the reverb thing - well it's OK on instrumental music, and does give a sort of surround-sound effect. But on speech, or songs with vocals, it's awful! I think it's more of a novelty really - I really can't imagine that people actually used it for serious listening.

I left the set running for several hours and kept an eye on the voltages around the output transformers in case there was some fault that only appeared after some time. But all was fine, so the cause of the original output transformer failure will remain a mystery. Unless it was one of those black capacitors...?

Many thanks to Martin Ackroyd for sending me scanned copies of the manufacturer's publicity information for this set. The black-and-white photo above is from that information.

With regard to the reverb system the publicity information says:

Electro acoustical reverberation unit gives considerable depth and spaciousness to sound stemming from radio broadcasts or gramophone records and appears to expand the dimension of a conventional room to those of a concert hall.

Due to popular demand, the two pages of this publicity information are available by clicking the links below:

I have now purchased one of these sets for myself! It cost me £20.50 from a seller on eBay. It was in filthy as-found condition and the tuning scale was broken. I haved now restored it and included the details here.

I have added a separate section on this website discussing Philips high impedance speakers and related amplifier circuits.