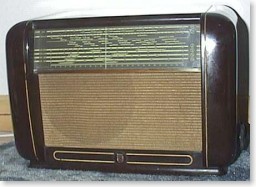 I had all but forgotten this rather bulky Bakelite set, which was found during a clear out. Overall condition is good with just a few scratches, all knobs and back panel. All it lacks is the Philips badge, which is missing from the front. The mains connector plug was also present, along with the usual 3" stub of cable so the first job was to connect a decent length of 3A cream sheathed two core.

After resurrection, this set was going to be given to my parents in law as a belated 50th wedding anniversary present (they married in 1949).

A few previous repairs were evident upon visual examination. EAF42s had been substituted for the pair of EAF41s, the set presumably working fine with them as they looked just as dusty as the other valves! Don’t ask me why Phillips used them in the first place, (or the EBL21 as mine had its diodes not used and linked to chassis, or for that matter the AZ31). Perhaps Mullard had a surplus going cheap, or maybe the engineers at Philips came back from the pub one afternoon and made a bet...

The set uses rubber wiring in places (mostly for the heaters and dial lamps) but it was all nicely flexible and still ok. Since a two-pin socket and plug, which has the possibility to be reversed, carries the mains, a double pole switch is used (I would, wouldn't you?). Particular attention was paid to the rubber-insulated wires connecting the switch to the mains, which although passing the Megger to chassis test were renewed with PVC insulated wire as a precaution. Nothing alarming was found anywhere else (such as shorts to chassis etc) except for an intermittent mains switch, which seems much better after a good spray with switch cleaner. The AZ31 rectifier valve was then removed and mains applied. Valve heaters and scale lamps all lit, and healthy A.C was measured at the rectifiers anodes.

Mains off again and out with the multimeter once more H.T to chassis measured only 20k-ohms with no kick from the smoothing electrolytics. The underside of the chassis is accesible (via a panel in the base of the cabinet) without removal, which is always handy. With my square of carpet sample spread over the bench to prevent scratches, the set was soon standing on its top.

This chassis uses two single 50uF 330v "wet electrolytics" (twin 50uF cans not yet developed?) which both refused to reform from the bench HT power supply (no surprises there, it's a Phillips after all!). With the offending cans disconnected HT to chassis measured nearly half a meg-ohm, so the HT wiring was tidied up, connecting any relevant together with an insulated connector block and the bench supply connected via a test probe stuck in the cathode pin of the rectifiers socket. All the black Philips capacitors, as I have found previously, seem pretty reliable (provided the casing is not split) and those in this set were no exception, none tested leaky.

With all heaters lit, an aerial connected and an eye on the power supply's current meter, HT was applied and gradually raised to 250v. A POINT TO NOTE WITH THIS CHASSIS IS THAT THE NEGATIVE OF THE MAIN HT SMOOTHING CAPACITORS IS NOT TAKEN DIRECTLY TO CHASSIS BUT RETURNED TO CHASSIS VIA A LOW RESISTANCE AND A 25 uF PAPER ELECTROLYTIC IN PARALELL. It looks as though this may be to derive a negative bias for the out put valve. I ONLY DISCOVERED THIS AFTER LOTS OF HUM AND SWEARING! If all else fails consult the service data!

The set worked on all wavebands, receiving plenty of stations across them all with just ten feet of aerial but seemed quite quiet and distorted, the volume control inoperative. The anode of the preceding EAF42 measured 35v, the service data gave it as twenty volts. Cathode voltage of EBL21 correct at five volts. Grid slightly negative. When checked the control proved open circuit. Temporary replacement with a spare restored the set to normal operation, with no quality or volume problems and all voltages correct.

The control used in this chassis has a shaft mounted on/off switch, which had to be removed and moved aside (and well insulated with tape!) before the control could be dismantled. The track certainly was open circuit, with about a quarter of it actually missing from the paxolin backing. It may possibly have been worn away, as the faulty section was at the low volume end. So with no chance of repairing the existing control and with voIume controls for 1949 Philips radios being somewhat rare, I decided replacement was the only option.

This isn't as easy as it sounds though, the offending control is non standard, it's rivited to a metal plate (which also carries the mains switch) which is in turn screwed to the chassis. A small plastic finger protudes from the control, to operate the cam on the mains switch. Definitly a Philips then! 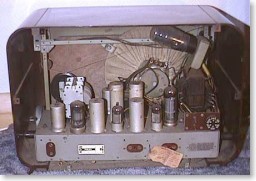 The first job was to detatch the remains of the control from the plate by dint of drilling away the rivets with a 4mm bit in the hand drill, the whole assembly being gripped in the bench vice.

Of course an "off the peg" control will not have the attatchment required to operate the switch, but can still be attached to the plate using the nut in the usual way. This worked out quite nicely actually, as the anti-rotation tab fits into one of the holes left by the rivets. There is enough room around the mains switch and the wires seem to be of adequate length, except the coax feeding the control from the last signal valve. The rubber insulating its centre conductor had become quite brittle so the length needed to be renewed in any case. With a new control fitted, the back of the switch now protuded into the chassis, fairly near some low voltage circuits. A piece of large diameter heatshrink sleeving was used over the back of the control, safely insulating the mains connections.

Now all that remained to complete work on the chassis were the faulty smoothing electrolytics. I had hoped to gut the existing capacitors and fit modern replacements inside, but this was not possible. Upon removing the push on top cap from one capacitor and cutting the top of the can as close to the end as possible, the internal plates were removed. There was however some sort of deposit between the base plate(+) and the inside of the case which proved to be a partial conductor. A resistance of 20k-ohms meant I could not use the can for the negative connection. All my attempts to remove the deposit failed, including scraping with a small bladed screwdriver and leaving the can filled with vinegar overnight! If I was still to fit capacitors inside, their negatives (and cases) would have to be insulated from the can. I considered sleeving the capacitor, but as I was unable to bring the negative wire out through the base, it would have had to have come out through the side of the can and be reliably insulated from it. I suppose I could have used a grommet and pretended it was original, but instead decided to re-install the originals and hide two new 47uF 450v axial capacitors under the chassis.

The two new electrolytics were mounted on a piece of tag strip near the original capacitors (for minimum disturbance of existing wiring) fixed by a screw already used for an earthing tag. Their negatives were taken via a new length of wire to the negative of a new 25uF electrolytic, on the top of the chassis in place of the paper cased original.

I have to admit it was a bit of a squeeze, so any bare wire was sleeved with insulation from heat resisting mains flex. It would be soak tested for five or six hours when fitted in the case, just to ensure there were no problems stemming from heat build up.

The case needed a good clean so was stripped of all fittings, speaker etc and along with the control knobs and handed over to my good lady wife who made a first class job of cleaning and polishing (they have the knack don't they?) with Brasso, while I cleaned up the tuning scale and cursor etc.

Her assistance was also invaluable when it came to masking off the case, prior to painting the creamy stripes (just visible in the picture) down the front and at the bottom of the cabinet. The old paint was first scraped out using the end of an old plastic knitting needle (before the polishing stage) and then a small brush used to apply some Humbrol enamel. The stains on the speaker cloth were effectivley removed with baby wipes, which are also very good for SOME tuning scales. I suggest you try a non visible area first!

The control knobs came up very well after a wash in a bowl of soapy water (remove the metal shaft clips first!) and a few minutes work with a clean duster.

The tuning scale, pointer and speaker grille were refitted into the finished case, followed by the chassis. There are four rubber washers (or rather were!) under each of the chassis fixing screws, presumably to take up any shock and prevent any movement of a rather heavy chassis cracking its mounting points (or in case said screws are over tightening). I tried tap washers, but they weren’t quite thick enough so four grommets were used instead.

The set performed well using the surprisingly small plate aerial inside the back panel, receiving some distant MW stations (although it does tend to be directional) and Radio Cairo on the 32m shortwave band. Although this set seems to be a complex set of solutions to easy problems it does perform well and sounds good. According to reports the set is in daily use in my parents in law's Southport home.

EAF41s and 2s are somewhat rare these days. If your really stuck change the base and connections to accommodate an EBF80, whose characteristics are almost identical save for an extra diode which is simply shorted to cathode.

The aerial, gram and speaker sockets are of 4mm diameter, and not the usual "wander plug" size. The original internal aerial plug's contact had parallel sides, and was rather loose in a worn socket. The socket frame was squeezed carefully but was already damaged. I replaced the plug with an ex GPO 4mm "banana" plug, which have remained unchanged for about the last forty years!

The knobs may be difficult to remove if the shafts have rusted slightly. I had particular trouble with one which refused to budge and had to be persuaded with a long stout screwdriver inserted into the gap between the chassis and the inside of the cabinet and levering between the shoulder of the knob and the chassis.

I would recommend you tie a piece of string to the knob to arrest its flight! I was lucky, it hit something soft!