I bought this unit in a BVWS Wootton Bassett auction a couple of years ago. I doubt I paid more than £5 for it.

For those who don't already know, Heathkit produced a wide range of electronic construction kits covering radio (both domestic and amateur), test gear, audio etc. The kits contained pre-drilled cases and metalwork, screen-printed front panels, and all the components and hardware required to complete the project. The resulting equipment (if built carefully) is every bit as good as professionally made units. In the UK, they were packed and sold by Daystrom Ltd in Gloucester. Many of the designs were modified to suit British conditions (such as the mains voltage) and components available. 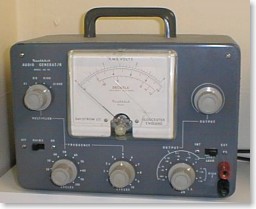 The Heathkit AG-9U is a mains powered audio signal generator, producing a sine wave output from 1Hz to 110KHz over four ranges. The output frequency is set, to two digits, using two 11 position rotary switches. One switch is labelled 0 to 100 in steps of 10, the other 0 to 10 in steps of 1. The total from these switches is multiplied by the value on the Range switch (X1, X10, X100 or X1000) to give the frequency.

The output voltage is set by an eight-position range switch and a variable control. The ranges are from 0.003V to 10V RMS at full scale (variable control set to maximum). The actual output level is shown by a large meter. A rectangular section in the top of the meter is lit when the power is on.

The circuit uses three valves. The main oscillator is formed by an EF94 small-signal pentode and an EL821 output pentode. The EL821 is configured as a cathode follower (anode connected to HT, load connected in cathode circuit). It therefore has a voltage gain of less than unity and a high current gain. The output is taken from this cathode load (via a DC blocking capacitor). A small lamp is used for amplitude stability, and is also driven by the EL821 cathode circuit. As the amplitude tends to increase, the resistance of the lamp also increases, thereby reducing the positive feedback around the loop, causing the amplitude to decrease. The circuit is therefore self-regulating. The lamp is run at low power and does not visibly glow, so it should enjoy a long life.

The third valve is an EZ81 rectifier. The lower current EZ80 would have been sufficient for this low power circuit. I suspect the EZ81 was used simply because it was the listed equivalent to the valve used in the American version, or because Daystrom had a large stock to use up. Three OA81 germanium diodes are used to drive the output level meter.

From my experience, vintage test gear is often in better condition as found than vintage radio equipment. This is probably because it spent most of its former life in a workshop environment where it would have been looked after. It would also probably have received much less use than a domestic radio, and would have been built to higher standards. Signal generators are also fairly simple compared to radios and aren't stuffed full of wax-paper capacitors to fail!

Despite some previous untidy repairs, my unit worked when I initially tested it. However the frequency was rather inaccurate (around 10% off) and the meter only reached about two thirds of the way up the scale at maximum output. All the capacitors on the Range switch had clearly been replaced, as had a number of resistors around the frequency select switches.

In order to check and if necessarily correct this, a circuit diagram was needed. A quick search on the Internet (typing "Heathkit" into the good old AltaVista search engine) lead me to the CircuitArchive website, which contained a vast selection of Heathkit schematics. I quickly located and downloaded the schematic for my AG-9U. This was complete, but did not give the values for the frequency selection and range components - the information I really needed! Immediately above the AG-9U in the list was the AG-9A. I downloaded this, and discovered that it was the American version of the same unit. The circuit was almost identical but used American numbered valves. However it did contain the component values I needed, in two tables.

The original CircuitArchive website no longer exists so I have made an archive copy availanle online here.

A copy of the circuit diagram is shown here. This is the UK diagram with the range and frequency component value tables from the American version shown below. The resistor table is a bit misleading. Only the first four values for each switch are actually fitted, the remaining values are made up by parallel combinations due to the complex custom-made wafer switches.

Although the capacitors were approximately the correct values, they were 20% components. I removed them and checked them using the capacitance range on my test meter. Most of them were near the ends of the tolerance range, which would account for the frequency variations I observed when testing.

The circuit calls for values of 0.5uF, 0.05uF etc. I had 0.47, 0.047etc, which are a bit too low. I tested a number of capacitors of each value from my stock to find ones that were closest to the required values. I erred slightly on the low side, so that I could add additional smaller capacitors in parallel for fine-tuning if required later.

From the circuit diagram, it can be seen that two capacitors are used for each range, one being 10 times the value of the other. By using another custom wafer switch, Heathkit have covered the four ranges with five capacitors, three of which are used on more than one range.

I then replaced the original American-type two-core mains cable with a modern British three-core cable, and earthed the chassis. The output level meter was not reading zero, so I set this using the zero adjustment on the meter itself.

Time for another test. After ten minutes to allow the unit to warm up and stabilise I checked the output frequencies again. My test meter has a frequency range, which is useful for this. They were much closer than before, but still not quite close enough.

Before dealing with this, however, I needed to deal with the output level, which was still too low. By switching to 50Hz I could be confident that the output level indicated by my test meter on AC volts range would be correct. Most test meters will work much higher - several hundred Hz at least - but I didn't know how high mine would go accurately so stuck with a known good level (mains frequency).

I set the signal generator to the 10V FSD output range and adjusted the variable control to maximum. The test meter gave a reading of a little over 8V. I reduced the output to exactly 8V, then adjusted the Meter Control pot (an internal control) to give a reading of 8 on the output level meter. I then turned the variable output back to maximum and adjusted the Oscillator Control pot (another internal control) to increase the level to the point where the output meter reaches the end stop (about 10.5V). I then tried the other frequency ranges. On the top range the output meter didn't quite reach 10V so I turned the Oscillator Control up a bit more. I don't know what the correct set-up procedure is, but in the absence of any instructions, this seemed to work OK.

I then returned to the frequency accuracy. I don't know what the original accuracy was, but I was hoping for around 2% if possible. Because of the capacitor arrangement mentioned earlier, it was clear that changing some capacitor values would affect more than one range. It was therefore necessary to start with the two middle ranges (which use all shared capacitors), and then do the two outer ranges by only trimming the capacitors that are not shared.

Fortunately, the X100 range was accurate enough (well within 2% right through the range). The X10 range was a bit high, as was the X1 range, so I switched back to X10 and started trying extra small capacitors in parallel with the 0.047uF capacitor shared by these two ranges. An extra 2.2nF (0.0022uF) was sufficient to bring the X10 range into tolerance. The X1 range was still a bit high (fortunately), and an extra 10nF (0.01uF) in parallel with the 0.47uF corrected this.

The top range was too low, even though the capacitor used was a 47pF 1% type (the exact value specified). I removed it and fitted two 80pF capacitors in series. This gave 40pF and the frequency was too high. An extra 5pF in parallel (giving 45pF total) had the desired effect. This range is a bit less accurate, particularly right at the top end (about 5% out). This is probably due to stray capacitance. However, it is close enough for any tests I am likely to want to do.

This amount of trimming may seem unnecessary to some. However, I feel that test equipment of any sort should be as accurate as possible. When it is being used, we tend to assume, without thinking, that it is exact, so it is desirable to get it as close to exact as possible.

Although the chassis was now earthed, the circuit 0V rail was only connected to the chassis at one point. To avoid ground loops when using the unit with other earthed equipment, I decided to try separating 0V from earth. The unit continued to work OK, but when viewing the output on a 'scope there was a small but noticeable amount of noise present. Connecting 0V to earth via a 0.01uF capacitor removed the noise, and the unit worked across all ranges the same as it had with 0V and earth connected. I used a 1000V capacitor for this job.

Cleaning and Finishing Off

With the knobs removed, I cleaned the front panel and the case with foam cleanser, taking care not to get it into the slide switches. The knobs were cleaned in warm water and washing up liquid, as usual. The unit was then reassembled, and left running on an extended test for several hours. It is now part of my test equipment, and performs much better than my previous transistorised Altai AF generator.

I have now discovered that the frequency accuracy was quoted at +/- 5%. The full specification of the unit (AG-9A version) is given on this page at the Heathkit Virtual Museum. It also gives the release date as 1958.