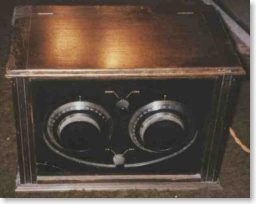 Whilst staying at a friends farm for my 3 weeks holiday, the farmer knew that I was interested in all things radio or television asked me to take a look at this old radio. After explaining that I had no test equipment with me, I agreed just to take a look. To be perfectly honest I thought it might be either his old Grundig Yacht Boy that was his pride and joy many years ago, or their old Bush VHF radiogram. You can imagine my surprise when he turned up with this wooden box and large old horn speaker. I was totally intrigued, I have never seen anything like this before, but there was more to come.

There were no markings on the box to indicate make or model number. The two large knobs on the front although numbered gave no indication of frequencies or stations. The two smaller knobs were for on & off with the wave change switch marked Long & Short. The farmer told me that a friend of his, who was also a Television engineer, had got this set going 20 years ago, but had been unused for the last 10 years. Rather than just switch it on he would prefer someone like me to take a look first. 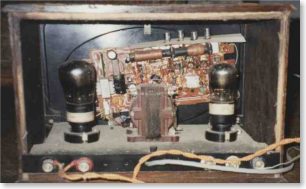 The sight that greeted me when I peered into the back was even more astonishing and will have you restoration purists up in arms. Careful investigation revealed that the original chassis with Mullard PM1 and PM2 valves had been completely bypassed or wired out. Instead the mains lead fed directly to rotary 2 pole mains switch via a fuse, this then fed directly onto this newer PCB which had an on board mains transformer. The PCB was very skilfully mounted so that the tuning and volume lined up with the two large front knobs and the on off switch also lined up with the correct control on the front of the cabinet. Wave band change was achieved by lifting the lid of the cabinet. The output was taken to two screw terminals on the old chassis.

All the connections and solder joints looked very good and as the set had been stored in the warm and dry I decided to connect up the speaker and switch on. The speaker burst into life with a tremendous crash of lightning static from some nearby thunderstorms. I soon found Radio 4 on the long wave, switching to medium waves I found all the local and national stations, shortwave produced a good collection of foreign signals, switching to FM I heard all the BBC nationals, three local radio stations plus of course Classic FM. I left the set on, tuned to BBC Radio Cornwall. 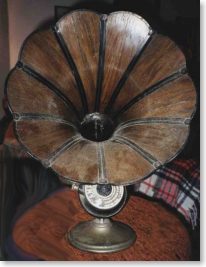 After a while I noticed that although clear there was a distinct rattle coming from the horn speaker. I could not find a way to strip down the horn speaker so I turned it upside down and gently tapped the base. This produced a pile of dust balls, dead daddy-longlegs, spiders and moths plus one newly evicted rather large lively spider. Luckily my wife was out, the spider scuttled into a corner and was not seen for the rest of the holiday. The speaker did sound clearer and I ran the set for the rest of the holiday. The tone is a bit tinny by todays standards, but even at low volume it can be heard clearly throughout the holiday home and into the garden, almost as if the sound is being projected out at you.

I did discuss with the farmer and his family about getting the set restored properly but they were not keen. If the set was restored it would only receive Long and Medium waves which would only give them BBC Radio 5 live and on a good Day BBC Radio Cornwall as AM reception in this part of Cornwall is rather poor. But with this new PCB fitted they can get all the stations that they want on the FM band on a metre of trailing wire!.

The radio and horn speaker are now installed in the main room/office of their farmhouse, and is on from early morning to last thing at night.

So what have we got here, a receiver of unknown origin with two 4pin Mullard valves, one marked PM1 the other PM2 which I date back to the 1920's or early 30's (according to Paul's website). This has been electrically bypassed with a PCB which I guess comes out of a 1970s music centre. The horn loudspeaker is an Ampion LR10, stamped on the transducer is the following: Resistance of 2kohms. The manufacturers address is Alfred Graham & Company, Crofton Park, London SE4.

Thanks to Octode who identified the radio as a Graves Vulcan.