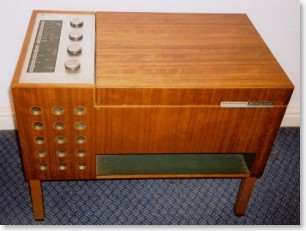 An old school friend of my wife was responsible for the cabinet design of the Ferguson Minigram. She had owned one and it had been stored for some years. Because of her personal interest in the model, I agreed to get it working for her.

The Minigram was designed in the early 1960s to respond to the fashion for furniture finished in Teak or Afrormosia veneer, to reflect the rectangular style of the period and to be unusually compact, echoing the fashion for the Austin/Morris Mini car. The cabinet has decorative brass-sleeved holes for the speaker fret. It measures only 23" L x 14" W x 18" H.

This example had been wrapped in brown paper for storage and the cabinet was in pretty good condition, requiring only a dose of teak oil to bring it back to near new.

However, the owner's husband had been a bit of a do-it-yourselfer when it came to radios and the Garrard Autoslim changer has been messed about. The set had apparently gone through a period of 'being used by the kids', which had probably led to a number of problems. 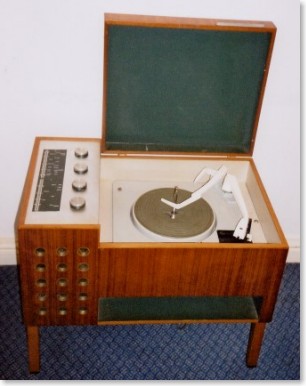 The chassis, if it can be called that, is typical Ferguson of the period, showing every sign of being designed mechanically and electrically for cheapness. The chassis consists of a plate carrying the controls and acting as a backing for the tuning scales. From this hangs a printed circuit board, supported only by its top edge. Although only designed for AC mains, because of the induction motor on the record deck, the set uses a series heater string and a mains dropper, the chassis being 'live'. The valve line-up is UCH81 Triode-Heptode frequency changer, UBF89 Double Diode Pentode IF amplifier and detector, a pair of UCL83 Triode Pentodes as AF amplifier and a push-pull output stage. The rectifier is a UY85. Apparently a pair of UCL83s could deliver 7.2 watts of audio, which would have been generous for the single 'mini' 7-inch elliptical speaker. The set tunes Medium and Long waves with separate scales and pointers for each waveband. Reception relies on a ferrite rod aerial, with no provision for an external aerial. There is a simple top-cut tone control ganged with the mains switch.

I could not find a circuit diagram for the set and find it very difficult to trace circuits from a printed circuit board, so proceeded down the usual route of replacing paper capacitors and re-forming electrolytics. The main HT smoothing capacitors responded quickly to the usual treatment. One cathode decoupling electrolytic was of the Plessey variety with a case that is half red and half blue, with a yellow sleeve. The case had burst, which was a bit of a give-away, so the capacitor was replaced. These Plessey electrolytics are common in transistor radios of the period and appear reliable in that application. Maybe they do not like the heat of a valve chassis. I found two Hunts moulded paper capacitors with cracked cases. They had become resistors and were replaced. With that, the radio worked, with sensible voltages everywhere, being reasonably sensitive and selective and having a surprisingly good bass, probably assisted by the negative feedback to the audio amplifier from the speaker coil. Although the audio leads to volume and tone controls are screened, there is some hum evident at high volume settings with weak signals. It occurred equally on radio and gramophone. I have not been able to reduce this and am forced to conclude that it arises within the printed circuit. Does anybody out there know better?

Fortunately, the Vintage Radio CD-ROMs contain the manual for the Garrard Autoslim. On inspection, I found that the motor switch was missing and the turnover pickup cartridge was dead. A push-button switch had been wired in to control the motor. The drive stalled when changing records and slipped during play, causing awful wow. Fortunately, I had been given a dead Dansette for spares and I was able to adapt the BSR switch from the Dansette to mount on the Garrard deck. The Dansette pickup cartridge was dead too, so I could not use that. Apparently, the crystal elements in these cartridges are liable to fracture, yielding zero output. Fortunately, there is a junk/radio shop near where I live and they found me a BSR SC11M stereo ceramic cartridge with a turnover stylus, which I was able to adapt. Maplin also advertise a ceramic stereo cartridge, which might be used.

As this is a mono radiogram, I connected the left and right outputs in parallel for a mono output. The new cartridge has a maximum playing weight of 6 grams, compared with 10 grams for the original. I adjusted the playing weight to 6 grams and, once the mechanism had been cleaned and adjusted, this was sufficient to work the auto-changer without the stylus skipping out of the run-off groove of a 7" EP record. Over the years, the motor had compressed the rubber bushes on which it is mounted. This caused the idler wheel to be running on the edges of the steps on the motor pulley, rather than in the centre. The motor height was put back to spec by adding rubber washers made by slicing grommets to thickness with a craft knife. It is always handy to have an assortment of grommets. They replace all sorts of perished bushes in tuning drives etc. The idler had become rather slippery on its outer rim. It was put in a lathe and spun lightly against 400 grade abrasive paper. This combination of treatments cured the slipping of the drive.

As with most radios, the knobs were specific to this model. The knobs are of moulded nylon and the waveband knob had been broken where it slips over the shaft, by over-tightening. I repaired this by putting the old knob in the lathe and turning out the centre to remove the whole section that fits over the shaft, together with the housing for the setscrew. This left me with a nylon shell, complete with the original decorative aluminium top intact. I then found an old WWII ebonite knob with a proper brass centre and hard steel setscrew. I turned this down to fit inside the shell I had created and glued it in place. This produced a knob that is man enough for the job.

Basic service data for this radiogram is on the Vintage Radio Service Data Volume 3 CD-ROM. However at the time Nigel was working on this unit he did not know the model number and the service data mentioned does not contain any photographs, so he would not have been able to find the data readily (there is a large amount of Ferguson data on the three CD-ROMs and it would have taken a long time to look at them all to compare). The data on the CD-ROM is from the 1963-64 edition of Radio and Television Servicing, which would give a reasonable estimate of the date of the set.