This typical early fifties wooden cased set from the Co-op employs a line up of Mazda rimlock series heater valves typical of the period. A recent repair job, it came with all knobs and back. The insides appeared unmolested with a nice layer of dust.

Other than the fact they were sold through Co-Op stores I don't know much about the brand but this set appears to have been thoughtfully designed, well constructed and is easy to service.

The owner reported a totally dead set, so I went straight to the mains plug. The mains cable was some brown "figure of eight" cable so would have to be changed for some modern sheathed two core before the set was returned. 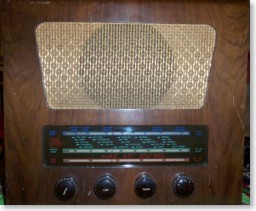 I was suspicious of a length of wire hanging from the mains plug, which turned out to be connected to the earth pin. It had probably been done to provide an earth for the aerial circuit which is always risky with an AC/DC set, especially as the capacitors age. A little knowledge is a dangerous thing! Needless to say the wire was duly removed.

The 2amp fuse inside the plug was blown, and had evidence of solder marks on the end caps as though a piece of fuse wire had been connected across it and had blown too. I was by now extremely suspicious and subjected the set to a thorough pre-plugin test.

I have not been able to find any information on this radio, so the resistor was removed to see if there were any marking that would give a clue to it's value. If there ever were they had disappeared sometime over the last five decades. I could have worked it out, but it would have taken some time.

The resistor was one of those fat light green wirewound ceramic types, with the connection leads wrapped around the ends, and familiar to any radio enthusiast. The resistance wire fell in pieces as it was unwound from the corroded end but eventually the total resistance of the recovered wire was able to be measured and found to be almost exactly 100 ohms. In operation the resistor may need to take the sets full heater and HT current if the dial lamps failed. I considered a 4 watt resistor would be adequate (the sets HT was assumed to be 70mA). A replacement resistor was fitted and another mains test carried out. This time a reasonable reading was obtained across the pins of the main plug.

All the components under the chassis are accessible through the access panel in the base, and as can be seen from the picture of the underside, are well laid out. The wax paper capacitors, including the dreaded grid capacitor for the output valve were in fairly good order, those with leakage measuring in the order of megohms. As this was a customer repair I thought it prudent to change them all to reduce future fault liability. Those isolating the aerial and gram sockets, and the pair associated with the mains suppression coils were replaced with quality 1000v types. A few other high value resistors were also checked, revealing the 150K ohm anode feed resistor to the 10LD11 triode anode to be high in value at about 340K ohms. This was duly replaced, and all other resistors were found to be within tolerance.

The HT smoothing electrolytics initially tested short with the Megger but began to re-form after a couple of minutes. The output valves cathode bypass electrolytic was also checked and seemed OK.

There was no obvious fault that I could detect so the set was connected to the mains supply via an isolating transformer and the safety lamp. With a length of wire connected to the aerial socket the set was switched on. Eagle eyed readers might be able to spot the valve heaters lit in the picture of the set's insides. (The voltage selector has been deliberately set to the 200 volt tap. The set is running through the safety lamp which drops the additional 40 or so volts.)

As is often the case with series heater sets the valves took a while to fully heat, but even before this, sound was coming from the speaker as the set slowly came to life. Stations could be received up and down all bands with good quality and volume but with quite a loud 50Hz hum. This line-up also gives good performance in my Murphy A192.

At this stage the dial lamps had not been replaced, so I kept monitoring the 100-ohm neutral resistor in case of overheating. It was barely warm after about an hour. All the 2.5V M.E.S lamps I could find were specified as having a life of 100 hours. I thought this was unacceptable, as the lamps were obviously important to the operation of the set. (100 hours can be thought of as 1 hour a day for 3 months). 3.5 v 0.7 watt lamps were quoted as having 1000 hrs life so I decided to use two of these. The lamps start off dim and slowly get brighter as the set warms up (which should help bulb life too) and the 3.5 volt ones were certainly bright enough. I wondered if renewing the scale lamps would help the hum, but unfortunately it did not.

I tried all the obvious things to eradicate the hum. All the valves were swapped with those from my Murphy A192 but this made no difference. Neither did trying replacement smoothing capacitors, output valve cathode bypass capacitor or connecting a 0.22uF capacitor across the mains input.
By now I was getting desperate. What on earth was going on?

The mains switch was bypassed, and the supply connected directly to the free ends of the "set side" mains wiring, in case the on/off volume control was leaky. This was a good opportunity to renew the mains cable. It was re-routed and brought in through an existing hole in the side of the chassis, and held by a "P" clip. This meant it was aligned with the slot in the back panel, instead of being crushed by the back as in the original. The volume and tone controls were also checked for leakage and continuity, as were the screens in the coaxial cable used for the audio connections. I even tried lifting one end of the screened cable but the hum persisted.

By now it was one o'clock in the morning so I decided to call it a day and have a good think about it tomorrow. 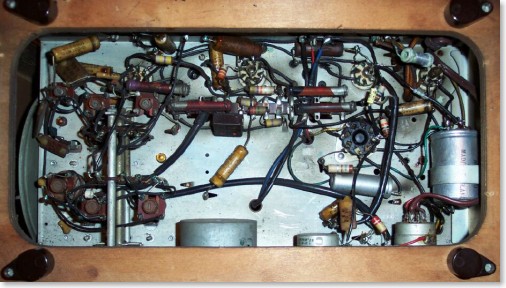 The set's HT runs through this winding, and being out of phase with the primary helps to neutralise any hum. In most other sets I have seen the centre tap wire would have been red (well it just seems more logical). And if they bought "off the peg" transformers...... The wire running from the transformer to the rest of the set WAS red. I wonder....

Both wires were disconnected and the D.C resistance of each winding checked. It seemed the green wire was at the end of the smoothing winding (maximum ohms between here and o/p valve anode) and the red, was as I suspected the centre tap, the readings from the red wire to each end adding to the total just measured. This meant that as the set left the factory the smoothing winding was actually IN PHASE with the primary of the output transformer, and would emphasise any hum present.

Due to the previous routing the red flying lead had to be lengthened with a solder joint and some sleeving in order for it to each the terminal of the smoothing capacitor. With the transformer re-connected the hum was much reduced, still a little louder than one would have expected, but certainly tolerable.

The set worked well on all wavebands with good sensitivity with only a very short aerial but the tuning cursor was found to be about 3/8" (9mm) out on all bands, disappearing from view at on end and stopping short at the other. I didn't think alignment was to blame as there was the same degree of error on all bands and the performance of the set was very good with all bands packed with stations. Since the tuning cord was very thin, rather than sliding the pointer along it I decided the best course of action would be to loosen the tuning capacitor drive drum and rotate it slightly on the shaft. With the gang fully enmeshed the drum was turned slowly until the pointer appeared at the end of the scale. The screws were tightened and the pointer checked at each end of the scale. Upon testing calibration was found to be correct.

The set performs very well, bringing in stations across all bands with only about four feet of aerial. I considered no alignment was necessary.

Other than re-gluing one of the paper labels on the back panel no additional work was carried out on the cabinet. The owner said he would like to do that himself. 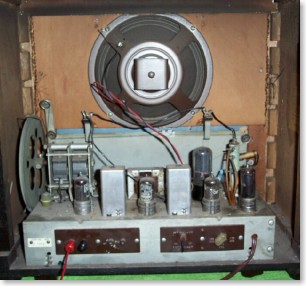 I hadn't encountered a Defiant set before but I was impressed with a number of features I liked on this one.

Firstly it was fitted with ceramic valve holders which should add to the reliability.

Keen eyed readers may also be able to spot a circle of holes drilled in the floor of the chassis around the central fixing bolt for the dropper resistor (just next to the smoothing capacitor). There was also a gap around the undersized bottom "hatch" to allow air flow though these holes which along with the roomy wooden cabinet should help keep the dropper resistor nice and cool!

I thought the Bakelite covers for the chassis fixing bolts(which also doubled as feet) were a nice touch too.

Although it is not shown in any of the pictures the back turned out to be made from 1/8" ply rather than the usual fibreboard.

Although the knobs simply pull off the shafts do not protrude beyond the cabinet, making subsequent touching of the metal shafts difficult. Thank goodness no knobs were missing!

CO-OP obviously realised that with careful design anything can be cheap to make but still of good quality and reliable, with good performance.