Cossor Empire Melody Makers are not too rare because they were a very popular kit in their time. Being mains powered, they are practical radios and they make a joyful noise. Arguably, they should come with a health warning today as the leads to the speaker are at HT voltage. 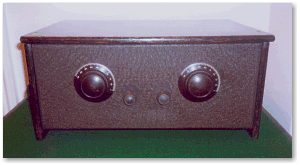 This radio was sold as a kit for home construction in 1931, and is entirely bolted together. All the original components have screw terminals. The case has oak sides and top with a brown crackle-finish steel front panel. The base of the case is a galvanised(?) sheet steel plate, which serves as the chassis. The set has three valves plus full wave rectifier, for AC mains only.

The first stage is a screen grid RF amplifier with gain controlled by varying the screen voltage. This stage has two separate tuning condensers, one in its grid circuit and another in the anode circuit. The second stage is a triode "leaky grid" detector with reaction control via a variable capacitor providing adjustable positive feedback from the anode to the grid. The detector is transformer coupled to the final stage, which is a triode output valve. The radio requires a separate loudspeaker with its own output transformer.

I was unable to find a circuit diagram or data sheet for the radio, so the first step was to draw out a wiring diagram following the layout of the components.

Next, I decided to dismantle the set completely. The only tools required were screwdrivers and 4 and 6 BA spanners. As there were two physically similar resistors on the chassis below the tuning condensers, these were marked with stick-on labels for later identification. All the nickel-plated and brass nuts and bolts were cleaned up with Jenolite rust remover, as was the chassis. The two large aluminium coil cans were cleaned up with white spirit.

The mains transformer and HT smoothing choke showed signs of severe rusting and swelling of the laminations, but checked out OK for insulation, so I cleaned them up with white spirit and otherwise left well alone. Both HT fuses were found blown and were replaced with 100mA cartridge fuses. All resistors were checked and found to be dead accurate. Capacitors were checked for leakage and found still to be very good. The HT smoothing capacitors were hermetically sealed paper types with little leakage. No need for re-forming electrolytics here. The original components were clearly of high quality. One of the tuning condensers was shorted, but as it was built with nuts and bolts rather than rivets, it was easily reassembled to cure the short. 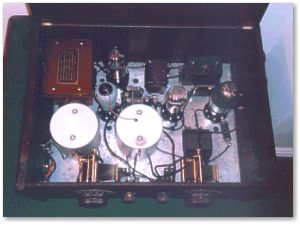 On firing up the radio, HT came up to about 190 volts, heaters all lit, a modest mains hum came from the speaker and a loud hum was heard when I touched the grid of the detector. All OK so far, but no signals could be heard. I could not hear the detector break into oscillation when I turned up the reaction control. I finally received a weak signal from Droitwich on long wave, and found that increasing reaction caused it to disappear. Reversing the connections from the reaction condenser to the detector coupling coil solved the problem, and Long Wave came in loud and clear. However, nothing could be heard on medium wave. The wave change switches are a pair of toggle switches mounted below the coil cans and actuated by a push-pull rod from the left side of the radio. Both these switches had developed high resistance contacts, which repeated operation failed to clear. Two new switches fixed the problem.

The valves in the radio are 4-Volt indirectly heated types, but I have not found their original type numbers. The set is running well with an S4VB RF stage, 354V detector, and an unknown output valve, possibly an ML4. The whole set is pretty tolerant of valve performance.

I have found the set great fun to use - it only needs three hands to tune it - and capable of receiving a wide range of stations, though clearly not quite as sensitive or selective as later superhets.

I recently received the following email from Nigel:

You put me in contact with John Higgins, who was rescuing one of the above from a scrap heap. He is now up and running after a long set of info exchanges and is delighted. Well done. I think this is what the hobby is all about.

John sent me a listing of all the valves used in Cossor sets, so the original line up for the Mains Empire Melody Maker is: RF stage MSG/LA, Det 41 MH, Output 41 MP, rectifier 442BU. All but one of my valves are different, but it works fine, just showing how tolerant these old TRFs can be.

Nigel also sent me his wiring diagram of the set, which I have included above.