This grand looking set would seem to be an attempt by Bush to compete with the luxury "Piano Key" types being imported from the continent at the time. They didn't do to badly by all accounts, these are fine sounding sets with good performance when going, employing two IF stages and three loudspeakers including a Grundig made tweeter unit.

One of my regulars had purchased this one from a well known Internet auction site as working. It did, but only just. He reported MW and LW were only audible with the volume control at maximum, and VHF wasn't working at all.

The chassis is electrically identical to the earlier VHF64, the data for which I obtained from the "Radio & TV servicing" series of books.

The cabinet is generally in good order, but there are a couple of deep marks in the curved part at the top which look as though they are the result of someone taking out their frustration with a screwdriver.

Immediately obvious on a visual inspection was the ferrite rod aerial that had broken during it's adventures with Parcelforce, and was dangling on the end of it's connecting wires, having come away from the mounting bracket in the top of the set. It is only a thin rod, (5/16" in diameter) the thicker ones seem to survive better. As a temporary measure it was joined with sticky tape, which would work well enough for testing. Although this large radio was extremely well packed, this does unfortunately often happen with ferrite rods. 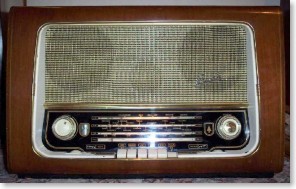 The whole chassis was extremely dusty and the only immediately obvious sign of any previous attention was an EZ80 in the rectifier position. The service data quotes the rectifier as an EZ81, which seems reasonable given the number of valves, and indeed the retaining clip still fitted to the socket was obviously designed to accommodate a larger device. The EZ80 was just as dusty as the rest of the valves though; suggesting this was not a recent change. I should think an EZ80 would find it rather a struggle to power this set, particularly after a few years and with a dozen or so leaky capacitors! I had a few spare EZ81, one in particular inside a small Westminster tape recorder, which I am sure does not need such a high rated valve. Presumably the last repairer of that one didn't have an EZ80! This way round though is not so bad, (provided the thing it is used in can supply the extra heater current required) so I will 'rectify' (sorry!) this deficiency before handing the set back.

The layer of dust was so thick it could be removed in lumps and vacuumed away. Great, now I could actually see if the valve heaters lit.

After a quick visual and meter check of the mains (not forgetting to check the mains plug - oh look, a 13 amp fuse - what a surprise...) I decided to take the chance and power up straight away through the safety lamp. The existing PVC insulated two core mains flex was in good condition, but since this AC set should really be earthed, a 3 core flex will be fitted as part of the job. The owner had plugged the set in a couple of days previously (so any damage will have been done, and the HT smoothing capacitors wouldn't re-form any way) so the EL84 was removed and the set was powered up via the safety lamp.

All fitted valve heaters lit, but the scale lamps didn't. I like to replace any non working dial lamps fairly early on in a repair, as they provide a handy visual indication the set is powered up. This particular Bush has a basic HT of around 300 volts, so any additional warning to the fact the set is on power is particularly welcome! In this case though, the dial lamps are quite awkward to access with the chassis in the cabinet. Since I was going to have to remove the chassis in order to gain access to the magic eye (to check anode resistor) and clean the knobs,tuning scale and backing plate, I took the opportunity to investigate the scale lamps. The glass envelopes of both lamps had turned black, usually an indication of a poor contact. A wiggle of both clip-on holders got one lamp working, but both holders were extremely loose. Two new 6.5 volt 300mA bulbs were fitted and the holder clips tightened with a pair of long nosed pliers. The tabs that the holders clipped to were actually quite rusty, and had to be cleaned up with a fine file. Two bright and reliable lamps resulted, binding with wire or a separate chassis connection not necessary in this case. 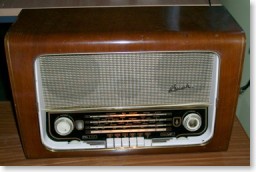 A whopping +12volts was measured at the output valves grid connection, the 0.05uF wax capacitor obviously very leaky. Power off again until this capacitor was replaced. The EL84 looked as though it had led a hard life, and when it was re fitted and the set powered up again about +1.5 volts was measured at the grid. It couldn't be down to the grid capacitor, as that was new. When you consider how much current the poor EL84 was trying to pass due to the leaky capacitor dumping +12 volts into it, the test results (cathode/grid leak) given by the AVO VCM weren't really surprising. A "used good/tested" EL84 was fitted before further testing.

Access to the innards is possible through a hatch in the bottom of the set, and when this was removed I noticed a wax "stalagmite" about an inch high, stuck to the wooden cover in a position corresponding to wax dripping from the mains transformer. Presumably the transformer had become hot and bothered over the years because of the leaky capacitors and excess output valve current. I consider my customer was very lucky his new toy did not require a replacement output transformer, which would have been awkward to replace due to the 3 speaker system.

The report from the customer was confirmed when the set was powered up, proved to be totally dead on VHF and just a few strong stations were just about audible on LW, and MW with the volume control turned right up. There was not much inter station noise, so I suspected one or more of the EF89 pentodes may be low emission. As it turned out, they were both pretty hopeless; one had virtually no emission at all while the other tested at about 25%. With these two replaced by a couple of used good examples from my hoard this grand set was nearly back to normal, with good reception on all the AM bands with excellent volume. Next the broken ferrite rod was replaced with a spare sent to me by a kind forum member, and once the old Ferguson coils on the replacement rod had been removed it was cleaned and the Bush coils fitted. After the optimum position was found, a soldering iron was used to melt some wax from one of the old wax capacitors, which was then dripped over the ends of the coils to prevent future movements. The trimmers were also locked with correction fluid, but don't put too much on or you will lose all reception and have to clean the trimmer and repeat the whole thing again (like I had to!). 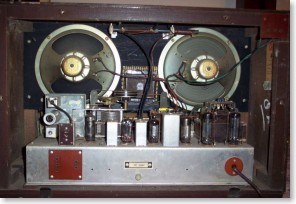 VHF, now with much improved gain of course, gave nothing but a high pitched howl. I have encountered this symptom before (see Murphy 482) and diagnosed it in the same way. Starting at the ECC85, each anode (and screen grid where necessary) de-coupled to chassis using a 0.1uF 1000v capacitor. This continued until I came to the de-coupler on the mixer anode of the ECH81, a ubiquitous Hunts moldseal capacitor. When the test capacitor was shunted across the original 0.047uF the VHF band immediately came to life with a healthy hissing. A quick twiddle of the tuning knob brought in a good Radio 2. The faulty Hunts capacitor was replaced with an "orange drop" 400v polyester type. VHF was good over the whole band, from Radio Two to Classic FM at approx 101 MHz.

My customer accepted my recommendation to replace all the wax and Hunts Moldseal capacitors (there are quite a few) to ensure future reliability. I also replaced the low voltage electrolytics, including the 5uF in the VHF discriminator. The tuning indicator worked well after this, the "petals" opening and closing as stations were tuned, but not at the audible peak of the signal, suggesting some mis-alignment of the VHF stages. There was also some distortion, which made the radio quite wearing to listen to for any length of time.

OH NO, I was going to have to attempt my first VHF alignment! Actually I needn't have worried, the process was well described in my service info and proved to be relatively easy and pain free! Thankfully no special equipment was required, simply my trusty Advance E2 RF signal generator and a couple of meters (including the AVO8). I won't include it here, because it was virtually identical to the procedure detailed in the VHF alignment section of Paul's site. Following adjustment the set sounded very good indeed, and once a new anode resistor was fitted at the tuning indicator socket, this opened and closed fully with good signals.

Performance and sound was good on all bands, particularly VHF, and in my opinion the tweeter was unnecessary.