This Bush VHF90 repair story was kindly sent to me by Steve Pendlebury.
It is interesting to note that it had none of the usual problems that plague this set! 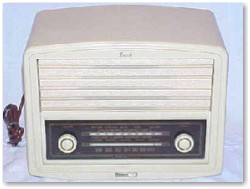 Thought you might like this little tale about a Bush VHF90 (just to show that I do have a sick enough mind to take on one like this!!). After all, we all like a challenge... and I can't lift tellies right now!

Started with the set, a copy of the trader sheet and also one of your report on such a set on your website. The first thing I did was to get the set on the bench and take a look.

I swore very loudly at the absence of an Audio Output Transformer. Not a standard one, and the one I had bought from a well known enthusiast and put aside proved to be open circuit! Luckily, I did have one in a box of miscellaneous bits and bats, this checked out OK so it was connected up.

Underneath the chassis, it was a case of good news and bad. The good news was that the notorious wavechange switch was intact, in good condition and operational. The bad news was that there appeared to have been a fire and some very suspect repair work done. Perhaps this was why the set was in the Radiophile Auction and me the only bidder?....... I wondered.

In addition, the mains lead had been chopped at the back and another 'fitted', so I removed the unmarked twin cable and sellotape. Mains 'Live' is applied to the anode of the UY85 via a 160 ohm wirewound resistor. Precisely how this had come to be 1.5K, I dreaded to think, so I checked all the components on the tagstrip. Capacitor C53 had been replaced by a 1000v component of the wrong value (2.2uF in place of 0.1uF !) and R25, on the low end of the volume control, which was meant to be 1K, was in fact 10 ohms. Both leads from the On/Off switch appeared to have been replaced with fuse wire (!) and there was infinite resistance between Neutral and Chassis. (For the record - should be 30 ohms - R38). R38 was missing, as were the dial bulbs. 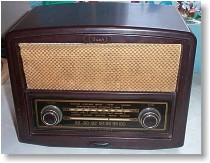 So, I tidied all this up, fitted the correct components, left out V7 for now and applied the mains. There was a flash and a bang as my new 30 ohm wirewound bit the dust. I went straight for C66, which was the correct component, and checked out OK when I put the AVO across it earlier on. Out with the Megger - and the cap was breaking down under load but was fine otherwise. Never seen that before. Chop it out (Mod hum not such a problem now) and replace R38 again.

There was no kind of crash or bang when mains was applied again, so I took off the power and checked the main smoothing capacitors, which were in reasonable shape, so they were left as they were. C57, however, was not 0.01uF as stated, but 10uF. An old part had been fitted, which is my only possible excuse for missing this. Replaced with a suitable capacitor, looked around for any other signs of unofficial tinkering, of which there were none, fitted the rectifier valve and try again...

The Dial lamps came up this time, and after a second or so, so did the valves. The amazing thing is that after all this, the set worked unexpectedly well. Every fault that the set had suffered from (apart from C66) had been man made!!! Like to know who put this one in the auction. Surely someone can't have changed all this lot because of the failure of C66 on the mains input side???

Ah well - with this quite nice little set (now its together and working I can say that!) playing away on the least annoying station I can find, I sit and wonder. All this work and not a decent programme anywhere on its dial....