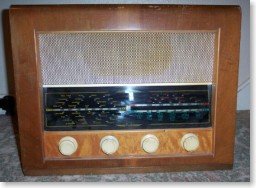 A fairly typical woodie, and not bad looking set for its era. It seems to be a tarted up AC11, using an almost identical chassis. The horizontal tuning scale now means there is space above for a large centrally mounted elliptical speaker.

This one was left for repair, a surprise for the customers wife who's mother used to own the set. It was in use up until about 18 years ago when it was put away in the loft when the old lady passed away.

It looks as though the radio had been exposed to a small amount of damp while stored, as the back cover is slightly warped and the back cover screws have a coating of rust. There is also some corrosion on aluminium parts of the speaker and tuning capacitor and the chassis was covered in a thick layer of dust and cobwebs (see photo below.)

The tuning scale is in excellent condition but the lettering on the cream Bakelite (?) control knobs was worn. The tuning knob rotates without moving the tuning cursors, so the tuning drive cord may need replacing, and the cabinet finish had deteriorated in some places, hopefully just a strip and wax is required. The BUSH transfer on the top of the cabinet may present a problem in this respect. A couple of glued joints have also failed at the base of the cabinet.

The chassis looked complete, and all valves appeared to be Mullard originals. The two core PVC insulated mains flex was in good order and of a decent length, and able to be used for testing.

I didn't like the look of the UL41 though, which appeared to have lead a hard life. It tested OK on the Avo VCM MkIII (now that IS a surprise) as did the other valves. Apart from the all too common 13 amp fuse in the mains plug, nothing else was found amiss with the mains side of the set.

These little Bush AC sets use series heater valves powered from a tap on the double wound mains transformer which means a three core cable can be fitted to provide an earth. The UY41 rectifier valve was removed and a BY133 diode (with leads carefully sleeved) connected from anode to cathode of the rectifier’s socket. A quick megger check from the cathode pin to chassis gave a reasonable resistance reading across the HT line. The set was connected to the variac, which would be slowly wound up from zero in order to re-form the HT smoothing capacitors.

The chassis can be quickly removed, once the knobs are pulled off there are just two screws to remove and two tuning cursors to unclip from the drive cord and out it comes. The "tabs" which locate into slots on the base of the twin tuning cursors moved normally when the tuning knob shaft was turned, and I discovered the tuning cursors themselves were quite stiff on their mounting rail. The cord still slipped slightly though, so the pulleys were oiled and the tuning operated end to end a couple of times, which seemed to help and once the cord tension spring was lubricated the cord tightened. The cord is very easy to renew on these sets in any case.

A meter was used to monitor the DC voltage at the terminals of the smoothing capacitor. The mains input voltage was slowly raised over a period of about 25 minutes, a few volts at a time. The capacitors seemed to be happy, and remained cool during the process. The second half had a reading of around 40 volts lower than the first, the drop presumably being caused by around 4mA flowing through the 10K ohm smoothing resistor to chassis via leaky decoupler capacitors.

Both scale lamps worked, which made a pleasant change. They will be replaced anyway though, since this is a repair job.

Out of curiosity I checked the voltage at the control grid of the UL41 socket, and discovered a massive +69 volts!! Just to be sure I checked it with another meter. Guess which wax capacitor was replaced first! Then at least when the set was powered up with the rectifier in position the output valve would not sweat so much.

Medium wave had been selected before the chassis was removed, and once all the valves had been re-fitted power was applied. After a few seconds all valve heaters were glowing, but there was total silence. 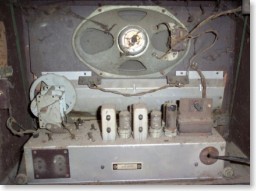 Even with an ear to the speaker, there was still silence. Not even a hum. Oh dear, I wondered if that leaky capacitor could have caused excessive current to flow through the output valve and cooked the rather small output transformer. A meter applied to the "supply" side of the speaker-mounted transformer showed +270v DC. The anode side showed zero volts. Sure enough, a continuity check confirmed an open circuit primary. That was it then, a duff output transformer. Not entirely surprising when you consider the leaky grid capacitor, and of course the damp atmosphere probably wouldn't have helped. The voltages in other parts of the set seemed reasonable.

It just so happened I had an AC11 also in for repair in the workshop at the time, which uses a virtually identical chassis. A minute or so later the AC34 chassis was in the AC11 cabinet and plugged up to the frame aerial and the AC11's speaker mounted output transformer. Power was applied again and this time sound was heard through the AC11 speaker.

The AC34 chassis worked well considering it was still full of wax capacitors, with stations able to be received with good quality and volume on MW and LW, (and on SW after an external aerial was connected) once the wavechange switch was given a quick spray of switch cleaner.

There was now about 20 volts DC across the output transformer primary, which I would think is about right. The UL41 cathode voltage was slightly less than the figure quoted on the trader sheet but not enough to be unduly worried about.

As far as I can see the AC11 and AC34 circuits are identical so the output transformers are interchangeable. A deal was done with a BVWS forum member who had an output transformer and some other parts from an AC11for sale, (thanks Trev) and when the replacement arrived it was duly fitted to the loud speaker. The tone correction capacitor (0.01uF) was also replaced at this juncture. The rubber wiring to the transformer and dial lamps had started to crumble when handled so this was also renewed. I like to carry out a little "mod" to the speaker/ dial lamp connector plug on these chassis, which involves tying a small loop of waxed twine around it's base, big enough to insert a finger in order to aid the plugs removal. Less risky than trying to lever it out with a screwdriver or pulling on the wires. A small cable tie under the pins would do very well too. Leave the tail to pull on.)

With the mains flex, all wax capacitors, the audio triode's cathode bypass electrolytic replaced and the replacement transformer fitted, the set was powered up again. This time though it worked perfectly on all bands. The stations seemed to be in the correct places on the tuning scale, and were received on all parts of the band. Therefore performance was judged good enough not to require alignment.

As described previously the cabinet looked rather sad. There were a few scratches, but no chips in the veneer. Since leaving the set for repair, the customer had agreed to attend to the cabinet defects himself.

I did give the cabinet a good clean with white spirit though, and a quick rub with wax polish. The cream knobs were quite dirty, and the once red lettering was mostly worn away. The metal shaft clips were removed and the knobs washed in a bowl of warm soapy water. An old toothbrush helped to shift the more stubborn grime.

The coloured lettering was re-created by rubbing over with a dark red wax crayon, in a similar way to brass rubbing, so that the wax remained in the recesses. Any excess wax can easily be removed with a dry rag. I was very pleased with the result. The lettering was protected with a layer of clear varnish applied from a very small paintbrush.

If an output transformer had proved to be un-available I would probably have fitted an RS replacement. Although slightly bigger than the original, an RS replacement could be fitted easily as there are two sets of mounting holes on the speaker bracket, the outer pair being most suitable. After all, I wouldn't fancy drilling additional holes in such close proximity to the speaker.