Despite the valve types, this is actually an AC only set, and the first in a series of Bush “quick release” chassis. It is too, one having only to pull off the control knobs and remove two screws to slide the chassis out. The connections to the speaker mounted output transformer and internal frame aerial are by plug and socket.

The series heater chain is powered from a tap off the double wound mains transformer, so the two core cable fitted to this set would have to be changed in order to provide an earth for the chassis.

Everything looked complete above decks and visible rubber insulated wiring for the internal frame aerial and connections to the speaker mounted output transformer appeared to be in good condition.

Once the half inch layer of dust was brushed away, the chassis looked quite reasonable. The set came minus a mains plug, as it was an “antique” shop purchase.

Mains checks passed OK, with the mains transformer giving the expected reading and no leakage to chassis.

The main smoothing capacitors reformed perfectly after about twenty minutes with the Megger.

Since all was well the set was run up slowly through the Variac, and an eye kept on the meter connected to the control grid pin of the UL41 output valve. With mains at full but a rather low HT (106v) a whopping +17 volts was measured at the UL41s grid! Guess which capacitor I replaced before going any further! 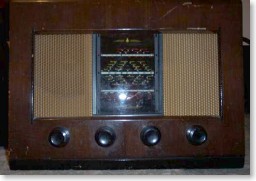 The remainder of the wax paper capacitors tested leaky, (most around 0.5 -1 meg ohm) and were replaced with modern types rated at 400v DC.

A few resistors were also out of tolerance, most notably the anode feed to the UBC41 (150K ohms) which had risen to 210K, and the grid cathode resistors for the mixer section of the UCH42 (which had risen in value from 470K to 650K ohms), and the UL41 (again 470K) which was actually open circuit. I was a little surprised as I have found the type of resistor used in this chassis are usually fairly reliable, that said high value resistors (and particularly anode feeds to the audio triode) seem more inclined to change their values. The cathode grid resistor (47K ohms) for the UCH42 oscillator triode was very close to the 20% limit, at 56k, so was renewed as a precaution.

At next switch on, all valve heaters lit and HT began to rise slowly. After about twenty seconds a rather low HT was reached, and I was just celebrating the fact a weak station could just be heard when the UY41 rectifier suddenly began flashing over inside. The set was quickly switched off and a replacement UY41 was fitted. The valve tester showed the suspect UY41 had a heater/cathode leak of about 10Meg ohms, so perhaps the fireworks were some other deposits burning away.

I also renewed the dial lamps at this point too, as they were not working. These are probably the most common type to be found in vintage radio, rated at 6.3 volts 0.3amps. The two lamps are connected in series and driven from another tap on the secondary of the mains transformer. One of the lamps had an open circuit filament, but the other (the good lamp) was corroded into the holder. I suppose I could have left it but was unsure of the bulbs age, and since this was a customer repair I would change both. The glass envelope separated from the base during removal from the socket. Isn’t it always the way?

Just to be on the safe side, before restoring power I made a quick resistance check from HT to chassis, in case there was some reason for the rectifiers demise. A reasonable reading was obtained with both a standard meter and the megger, so I guess it was just a faulty rectifier.

This proved the UL41 faulty (surprise!) a fact confirmed by the valve tester which showed almost a dead short between cathode and heater. All other valves tested OK. My workshop emergency spare (a goodish used) UL41 was fitted for further testing. There was now a very slight grid voltage when the set was powered up again.

The sound was now much better and performance acceptable. I wondered if alignment would help and the set responded well to a quick twiddle, as per the Trader sheet. Many Bush sets, although designed with the service man (or woman?) in mind, are a twiddlers dream as they have the IF adjustments easily accessible while the chassis is in the cabinet. The alignment is always worth checking in case anyone in the past couldn’t resist the temptation……..

Now to sort out the output valve.

The UL41 is notorious for developing faults due to build up of deposits between valve pins inside the envelope, and cathode heater insulation failure. The rest of the series heater rimlock range are sometimes prone to this too, but not quite to the same extent! This has lead to stocks being used to keep equipment going and means new old stock or good used UL41’s are getting scarce and expensive.

Since this is only a run of the mill Fifties woody, I suggested to the owner that he might like me to convert it to use a UL84 instead. These are still cheap, plentiful and importantly much more RELIABLE.

The UL84 is easily capable of passing the 35mA or so required for this set and the heater current and voltage are identical to the UL41. In fact it will have to be restricted to prevent damage to the output transformer. The cathode resistor in this set is 220 ohms, which may not provide quite enough –ve bias for a UL84.

When I make any modification I like to do it in such a way that it is easily reversible at a future date if necessary. 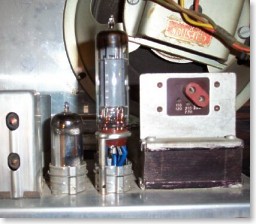 In this case the B9A socket for the UL84 is the same size, and has the mounting holes in the same position as that for the UL41. There is plenty of room to mount the new socket with the solder connections inside the original’s skirt, and secure it with studding or long screws and nuts. The connecting wires can be threaded down through the hole in the centre of the original socket and any additional screen grid resistors etc. can be added between the original connections and those of the new socket. All the de-modifier will have to do is remove the B9A base, unsolder the wires and plug in a working UL41.

First of all I carried out some experiments by soldering some lengths of wire to a B9G holder and plugging the bared ends into the appropriate holder connections of the UL41 socket. A N.O.S UL84 was plugged into the free socket and with a meter set to measure the current through the output transformer, the set was switched on.

The modification seemed to work fine, but the anode current was slightly high at about 45mA. Various screen grid resistors were tried but they didn’t seem to make much difference. The best results of all were obtained by the addition of about 200 ohms to the cathode bias resistor. This brought the anode current down to just over 30mA, the figure quoted in the trader sheet. The cathode voltage was now about 13 volts.

The new socket was mounted above the old one using stand off pillars robbed from a scrap rotary switch. The original nuts were used to secure the pillars under the chassis, and the screws used to fix the new socket.

The B9A end of the connecting wires were covered by sleeving for extra reliability, and the free ends were threaded down through the hole in the centre of the original socket as planned. The 200 ohm resistor was soldered to the new socket before it was mounted, (the wire at this end cut to about 15mm and left un insulated just in case anyone needed to take measurements at the cathode pin) with the other end sleeved in some insulation from similar gauge wire before being threaded through the hole along with the other wires.

Under the chassis the emerging wires were cut to about 50mm (2”) to avoid pick up of stray mains and soldered to the relevant tags of the original output valve socket. The small amount of slack was pushed back up the hole. The UL84 was plugged into the newly provided socket and hey presto, one bodged/ modified radio.

Since the AC11 has lots of room inside the case cooling shouldn’t be a problem.

Purists would of course be correct in saying the UL41 and UL84 have different anode load requirements, but I found in practice it made no difference .

DC anode current through the output transformer was correct, and a quick look with a scope showed no nasty oscillations or anything untoward.

The Bakelite knobs were cleaned in hot soapy water to remove the usual grime and then polished. The old lettering was traced over with a gold paint pen, and surplus scratched off with a fingernail.

Once this had dried varnish was applied over the lettering with a small paintbrush to prevent future damage.

The tuning cursor was rather stiff on its rail so a few drops of sewing machine oil were applied.

Performance was fairly good on the MW and LW bands using the built in frame aerial, and actually better than using only an external aerial. It seems this set requires the frame aerial to be connected to work properly.

The owner commented that he thought the sound was rather muffled. A change of the RF filter capacitor at the input to the output valve to 0.001uF improved the tone slightly. There was also a slight hum which seemed to be getting worse and the volume couldn’t be turned right down. A replacement 50uF electrolytic bypass capacitor at the cathode of the UBC41 worked wonders here. Further high frequency response could be achieved by removing or altering the value of the tone correction capacitor mounted on the output transformer. In my set it was 0.01uF.