The Alba Superhet Five was released in 1932 and the version here is the radiogram, which contains the first type of Garrard autochanger. The valve line-up is: SP4 frequency changer, VP4 IF Amplifier, S4VB detector and AF amplifier, MKT4 audio output and DW3 rectifier. The radio covers long and medium waves and is an early superhet having no Automatic Gain Control and using the SV4B as an Anode Bend Detector. Volume control is obtained by varying the bias on the VP4 and by attenuating the aerial input. 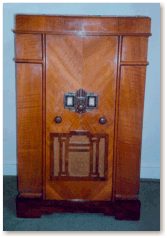 "Before" and "After" pictures are shown here. The chassis was as we like to find them - lots of dust, early "balloon" shape valves and not much evidence of previous repair work. A quick check of the valve heaters showed the rectifier to be open circuit, so that was one good reason for the set having been pensioned off. I was unable to obtain a good DW3 so the valve was replaced by an equivalent VR 120/350.

The chassis is finished in grey stoved enamel which cleaned up beautifully with Auto Glym car polish. 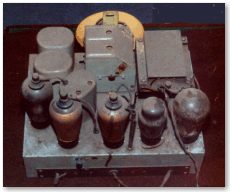 The main HT filter electrolytic capacitors live in a rectangular cardboard box clipped under the chassis and appeared to respond to re-forming in the usual way. However, after a couple of months use, one failed to near open circuit, resulting in very high hum level. The cardboard box was removed. It was possible to open one end without causing much damage and it was clear that the capacitors were potted in candle wax. By gently heating the whole assembly above a gas flame (be very careful of the fire risk if you try this at home) it was possible to pull the guts out of the box. Modern components were put back into the original box, using the original wires for termination.

All wire ended paper capacitors were leaky and the cathode decoupling electrolytics would not re-form. The paper capacitors were enclosed in card tubes with the ends sealed with pitch. The pitch at each end was softened with the tip of a soldering iron and the guts were pulled out without harming the tube. Modern replacements are smaller and were fitted back in the tubes. The ends were resealed with pitch, leaving the components looking original.

The electrolytics were not sealed with pitch and it proved possible simply to pull the guts out of the card sleeves. 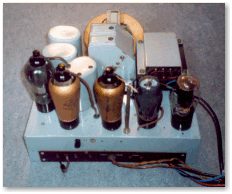 With the capacitors all replaced, the radio worked, but the audio sounded distorted and strangled. Checks showed that virtually all the resistors were high, some by about 60%, so all were replaced with 2W metal film types which are at least large enough to be visible, though some lead lengths had to be extended to fit the components in their original positions. This improved the sensitivity but made little difference to the distortion, neither did changing the audio valves. Strangely, the audio quality was very acceptable when working as a gramophone. Herein was a mystery. How could the anode bend detector have the required non-linearity for detection and, without change in bias, be linear enough to give good reproduction on "Gram"?

There was a clue in that the radio sounded better when the volume (i.e. the RF drive to the detector) was turned up very loud. The answer seems to be that the operating characteristics of the S4VB have to be set to a compromise between small-signal detection and audio amplification. In the end, I found a satisfactory compromise by adjusting the screen grid voltage. A small pre-set potentiometer of the type designed for PCB mounting was easily fitted into the wiring. The radio now works fine, the only problem being the lack of AGC which requires care to be taken when tuning past the powerful local commercial stations.

The cabinet was in fair condition but the top had the usual ring of missing finish due to water damage (from a flower arrangement?). The top was completely stripped and refinished with clear cellulose lacquer. The rest of the cabinet responded well to scratch cover polish and now looks very handsome, with its Art Deco dial and styling.

The autochanger is battleship construction and only required cleaning, lubrication and adjustment of the turntable brake.