I have recently started collecting small far-eastern pocket trannie radios. I am especially keen on the ones in brightly coloured cabinets. The majority of them sound dreadful, and I would imagine that large numbers were thrown away years ago. Those that survive tend to be in reasonably good condition - probably because they haven't had much use and have lived in a drawer for years.

Because of the number of similar models, it is not practical to list these by make/model as with older sets. Instead I have grouped similar models together (often in a single photo) with some general information and comments.

This seems to be one of the most common style of pocket transistor set from the early 1970s. I currently have ten, all of which are different. The aim is to get as many different colours as possible! The black and turquoise one are in fairly sad condition, and I will probably use the trim from a couple of the red ones to tidy them up.

From looking at the case mouldings it seems that there are two slightly different versions, one having more rounded corners than the other. Compare the third and fourth ones in this photo.

There are numerous different brand names on these sets. However the internals are so similar (the only real variation being that some run from a PP3 and others use two AA cells) that I think they all came from the same factory. Brand-names on mine include "Taiyo", "Harvard", "Falina", "Viking", "TG&Y", "Unisonic" and "Computron".

This is the horizontal version of the sets above. These do not seem to be anything like as common as their vertical brothers. I have only found these three so far, two being branded "Benkson 22" and the third has the printing worn away (I think it may have been another of the same). Internally these are all virtually identical too.

I am looking for more of this style in different colours.

Another range of very similar sets having different brand names. These are (in order) "Robinhood", "Ajax Playmate", "Sandoz" and "Elftone". The blue Sandoz one is slightly smaller than the others. The black Elftone is MW/LW while the others are MW only.

Another bunch of near-identical cases, but internally things are a bit more interesting! The red one is branded "Sanyo" while the other three are "International". I also have another black one branded "Maxim". The red and white ones are conventional five-transistor superhet models and give the expected level of performance (left photo below). The blue and black ones (and my other black one) have a completely different circuit.

They use an MK484 IC, which is an equivalent to the good old ZN414 TRF radio IC that featured in many magazine projects. Do a Google search for ZN414 if you don't know it. This is followed by a three transistor audio amplifier. We might have expected these to be a driver and class B output, but that is obviously too sophisticated for this set. The output is class A, with the speaker connected directly in the emitter of the output transistor, so it has to take the full emitter current. As a result the set draws around 200mA, so I doubt a pair of AA batteries will last very long. Being a TRF with just the one stage of tuning, selectivity is poor. I get "TalkSport", the local "Classic Hits" and "Five Live" spread over the band. Weaker stations are nowhere to be heard. Sound quality is actually not too bad - better than some of the five-transistor ones! As long as you only want three stations and can afford the batteries...! 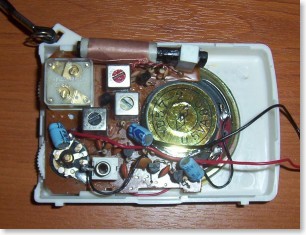 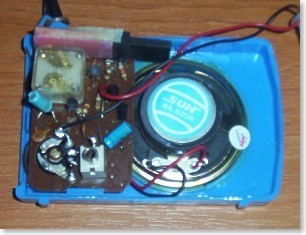 These are the same innards again, but in military-style cases presumably intended to appeal to boys. Again the brand names vary, these being "Ajax Cadet" in military green, "Talyo" in a rather un-military red and "Harvard Cadet" in a slightly different style black case.

I think these are cute! It's the same standard radio PCB inside, but with a completely different style of case. They may have been intended for kids - the "My Radio" name seems to fit that idea. I'd like to get some more in different colours too.

Thse are tiny sets. To give a sense of scale, the single AA battery fits right along the bottom edge. They have still managed to cram in a six transistor (plus 3 diodes) superhet circuit, and get the whole thing to work from just 1.5V. This is not one of my better photos unfortunately, so I have included a separate photo of the yellow one below.

These are branded "Ajax Dandy" (yellow), "Emperor" (blue and black) and "Expo '70" (red). For some reason the red one has the strp on the opposite side to the other three, and the controls are also reversed.

The yellow one definitely doesn't work (it just howels). I think a couple of the others do work, but I can't remember.

Note that the boxes (I have two) are fill colour rather than the usual two-colour printing. 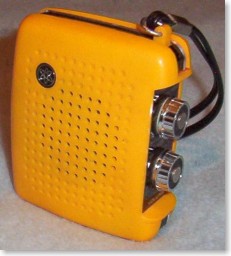 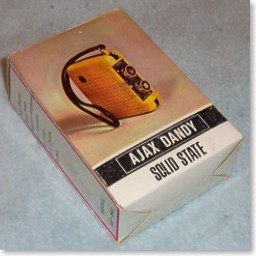 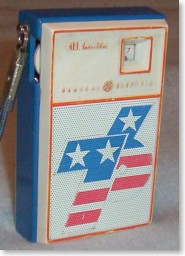 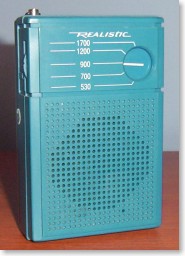 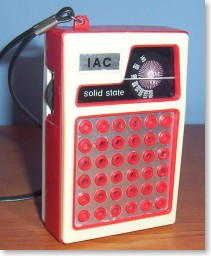 Here are a few more pocket trannies using the same basic innards in different cases. I now have a black version of the Realistic one too.